With Bitcoin losing ground, has the altseason begun?

There was a time when a pump in the Bitcoin market would translate into growth for other cryptocurrencies. However, recently, there have been signs of an inverse correlation between Bitcoin and many other altcoins, especially small-cap assets. The previous week’s market movement put major crypto-asset, Ethereum [ETH] in a top spot for incurred gains as its market cap grew by 5.9% week-over-week. While BTC’s market cap witnessed only a meager growth of 1.5%.

Despite a low rising market cap, BTC’s price touched a yearly high at $12,473k, whereas, ETH also followed its lead and reported its yearly high of $447. However, the winners of this week’s rally were the small-cap assets. According to data provided by Arcane Research, the best-performing assets in the past week were Waves [103/70%] , OMG Network [73.13%] , and Tron [78.89%] . 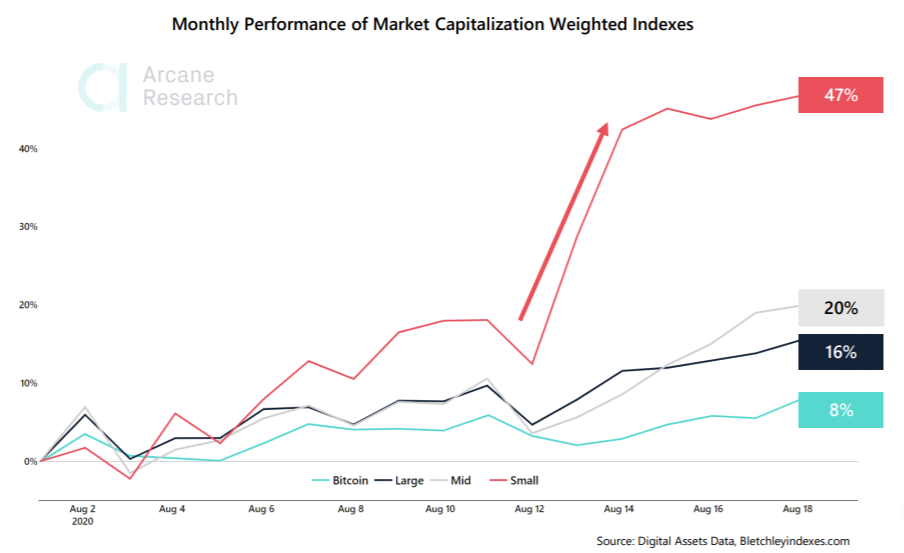 Although not confirmed yet, the analysts believe the market was in form for altseason, wherein the small-cap assets jumped by 45% in a week. This was more than double the growth witnessed the last time and surpassed 260% in YTD.

Similarly, CoinMetrics’ Bletchley Indices also reported Bletchley 40 [Small-caps] to be the best performing this week. Whereas Bitcoin underperformed the rest of the market and its impact was visible by the low gains generated by the Bletchley 10 index [Large-cap assets] .

The Bletchley 10 assets reported only 5.7% growth last week, while Bletchley 20 was still reporting higher returns of 10.9% to the investors.

The overall outlook of the market is bullish despite BTC’s restricted growth and a huge dent in its hash rate. The CMBI Bitcoin Hash Rate Index, developed by CoinMetrics, indicated it reached new highs this last week which is indicative of active miner participation.

As we move forward, the sentiment in the market has continued to indicate “Extremely Greedy”.Taking past precedents into account the price is susceptible for sudden swing and the traders are advised to be cautious.

The post With Bitcoin losing ground, has the altseason begun? appeared first on AMBCrypto.