The SEC sues Telegram, aims to stop distribution to US investors of Grams sold in $1.7B sale

The SEC today announced a suit to stop Telegram, Inc. and Ton Issuer, Inc. from continuing what a lawsuit describes as an “ongoing illegal offering of digital-asset securities called Grams.” Grams were to be the native token for use on the Telegram blockchain, but (as discussed below) the SEC says they don’t have any utility at all, never did, and are securities subject to the registration requirements of U.S. securities laws. A pretty significant speed bump for what was among the largest and most coveted token sales of the ICO age.

As part of the lawsuit, the SEC also secured an emergency temporary restraining order against the company from (among other things) continuing to deliver or sell Grams to anyone. Per the lawsuit, and as further grounds for the emergency relief, the SEC says that Telegram has “committed to flood the U.S. capital markets with billions of Grams by October 31.”  There will be a hearing on October 24, 2019.

Telegram raised $1.7 billion from 171 initial purchasers using a Simple Agreement for Future Tokens (SAFT).  They used those funds, allegedly, to “capitalize its business and finance the creation of its blockchain” (the “TON Blockchain”).

The SEC says that $424.5 million of the sale proceeds come from American investors and that the defendants are about to sell more to Americans.  The SEC say that this violates the registration requirements of the Securities Act of 1933 and entitles them to immediate injunctive relief, expedited discovery, disgorgement of ill-gotten gain + interest, an Order stopping them from selling or distributing more Grams, and a civil money penalty.

Why is the lawsuit filed in federal court?

This lawsuit is filed in a US federal court instead of in an administrative proceeding in front of the SEC itself. The reason for this may be because (according to the Court’s Order, which was prepared by the SEC), Telegram refused to accept service of a subpoena from the SEC.  If so, it’s no surprise that the SEC went to federal court to seek quick and emergency relief.

According to at least one Telegram investor, the company thought they would be able to avoid the SEC by making adjustments to make it more “decentralized.” As this lawsuit and emergency TRO make clear, that’s not the case. 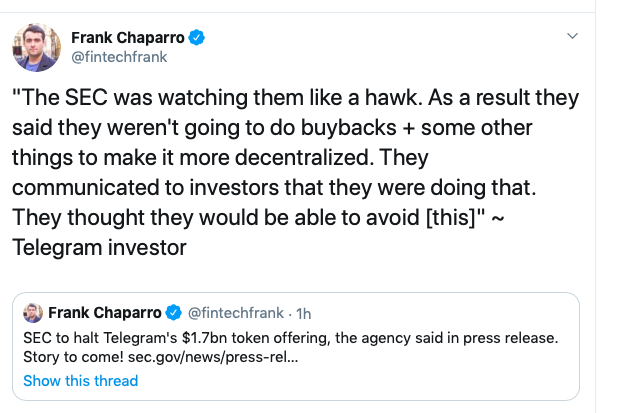 That’s evident in the suit being filed in federal court because a federal judge has more immediate raw power than an administrative law judge and also can issue rulings that become precedent in other cases.  (This isn’t to say that an action before the Commission is a nothing burger – it’s just a step removed from a federal judge).

The investor, a U.S. resident, said in a phone call with The Block that he expects the SEC action will result in an even longer lockup on his tokens. He anticipates trading won’t be sanctioned in the U.S., but also suggested that Telegram might follow the steps of Blockstack and register as a security under RegA+ (think, IPO lite). Readers might recall Blockstack went the RegA+ route out of an abundance of caution, although its executives have said they view their token as a utility.

Nevertheless, the investor was disappointed to see the SEC impede “technological innovation.”

Why is the SEC upset?

Here’s the problem, as the SEC seems to see it:  the Grams tokens are themselves securities.  There are a couple of reasons for that.  Among other things, the purchaser and subsequent investors expect to profit from Telegram’s work, there are no products or services that can be bought with Grams, and there’s an expectation of profit on the part of investors if Telegram builds the thing.

And here’s an even huger problem that the SEC sees, Telegram committed to delivering Grams by 10/31 and expects to sell more at the same time. But it never registered Grams as a security with the SEC for the planned offering and it also plans to make them available on crypto exchanges.  In short, “once these resales occur, Telegram will have completed its unregistered securities offering with billions of Grams trading on multiple platforms to a dispersed group of investors.”  Once the tokens are available on public markets, the SEC points out it will “be virtually impossible to unwind the transactions” given the “variety of unregulated markets” they will trade.  This is one more reason why the SEC sought (and received a TRO).

What does this tell us (if anything) about using the SAFT?

The issue here seems to be two-fold.  First, the SEC is trying to stop the distribution of Grams in the U.S. to U.S. investors and allowing Telegram to establish difficult to unwind facts on the ground.  Second, the SEC simply does not buy the argument that the SAFT agreements were investment contracts and thus securities but that the Grams tokens are not.

That dog does not hunt, according to this lawsuit. 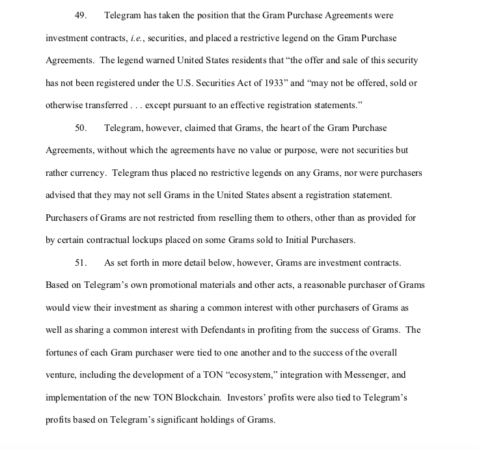 In short, just like the Telegram SAFT, the tokens themselves are investment contracts, per the SEC analysis, if they satisfy the Howey test.  That’s the SEC’s position — one assumes that this will be hotly disputed by Telegram and may result in more token related caselaw, and soon.

Stated a little bit differently, using the SAFT in and of itself never guaranteed that tokens later delivered would or would not be securities.  This lawsuit is a reminder that the SEC will independently analyze the purpose, function and utility of a token.  If it’s an investment contract under Howey it will be treated as such.  The mere fact that it has some functionality doesn’t mean it isn’t a security either.  Folks who saw it (or offered it) as an immunizer against securities laws are and will be sorely mistaken.

Does this have anything to do with today’s SEC/FinCEN/CFTC statement?

While it’s hard to know if the timing was a coincidence, this lawsuit was filed on the same day as a joint policy statement on AML and anti-terrorism reporting and compliance requirements for the digital asset industry under the Bank Secrecy Act. Although this Complaint does not allege any BSA violations, it does note as a concern militating in favor of stopping the distribution that Telegram will have no access to KYC/AML information for users of future services and that it’s “uncertain whether identification of parties to transactions in the secondary market for Grams will be ascertainable.”

Why are they going after Telegram like this but settled with Block.one for $24 million?

While I clearly don’t have regulatory telepathy, it appears that Block.one negotiated with the SEC and had probably sold a lot less into the US.  Also, while it may have been a sleight of hand, they swapped out the ICO ERC-20 tokens for a native token that can be used on the EOS blockchain.  If you believe the SEC’s complaint, Telegram dodged a subpoena and planned to unload hundreds of million of dollars in Gram tokens into US exchanges later this month.  It may be that the cases are slightly different.

The SEC sues Telegram, aims to stop distribution to US investors of Grams sold in $1.7B sale written by Stephen Palley @ https://www.theblockcrypto.com/post/43039/the-sec-sues-telegram-says-gram-tokens-are-securities?utm_source=rss&utm_medium=rss&utm_campaign=default October 12, 2019 Stephen Palley

Uber, Lyft, and Anchorage are said to be remaining with Libra, despite slew of dropouts

The Revolution Will Be Retweeted: The Breakdown Weekly Recap

Brave’s browser has been autocompleting websites with referral codes

For Litecoin, an upside breakout likely

The Revolution Will Be Retweeted: The Breakdown Weekly Recap