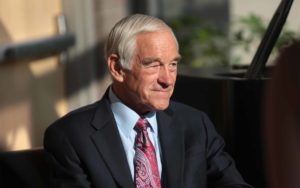 Former US Congressman Ron Paul believes that tax-free cryptocurrencies may help navigate the economy past recession. Paul, the consummate libertarian and eternal critic of the Federal Reserve, believes that the abolition of crypto taxes may help avoid a crisis similar to 2008’s recession.

On Monday, Ron Paul released a blog post via the Ron Paul Institute for Peace and Prosperity entitled, “Trump Is Right, the Fed is Crazy.” Paul, echoing Donald Trump, lambasted the Fed’s increased interest rates as “crazy.” In fact, Paul even harkened to the definition of insanity as doing the same thing over and over while expecting something new to happen:

Trusting the Federal Reserve to produce permanent prosperity instead of a boom-and-bust cycle is a textbook example of a popular definition of insanity being repeating the same action in hope of getting different results.

Paul’s solution is a bill called —rather unsurprisingly — “Audit the Fed.” For years, Paul’s call to audit the Federal Reserve has constituted an integral part of his libertarian platform. In the blog post, Paul notes that “It is likely that the next Fed-created recession will come sooner rather than later. This could be the major catastrophe that leads to the end of fiat currency.”

Paul’s solution is to coerce Congress into end the unreasonable craziness that he finds so evident. He says the bill is vital to this action and calls for precious metals and crypto to be exempt from taxes:

The only way to avoid crisis is to force Congress to end our monetary madness. The first steps are passing the Audit the Fed bill, allowing people to use alternative currencies, and exempting all transactions in precious metals and cryptocurrencies from capital gains taxes and other taxes.

Paul was seemingly born critiquing the Fed’s policies. He incorporated the stance into his run for presidential office in 2012 on the Libertarian Ticket. Just today, he fired another shot at the Fed via his Twitter account, highlighting the Fed’s role in power, war, and dependency:

The Fed is the beating heart of big government. It can create any amount of currency (out-of-thin-air) to fund whatever politicians want.

The Fed is the piggy bank that funds it all.

Paul’s libertarianism resonates with many in crypto community, championing both the decentralization of economic power, and a strong skepticism towards the fiat economy. His call for tax exemption of precious metals, gold, and crypto is also bolstered by his belief that, when fiat currency is unavailable or unwanted, these stores of value reign supreme: “A stable currency ensures that prices accurately convey the true value of goods and services.”

Would you support Ron Paul’s “Audit the Fed” bill? Do you believe abolishing crypto taxes may prevent another recession? Let us know your thoughts in the comments below!

Leading VC Investor: Dismissing Crypto is Like Dismissing Internet in 1993