RHOC was an investors’ dream. Ranking 30th on CoinMarketCap and led by an all-star team including Vlad Zamfir, the coin was well on its way to stardom as the token behind RChain – the blockchain platform hoping to rival Ethereum. No doubt it stood out among the likes of Tezos and EOS, focusing on implementing the first proof-of-stake validation and eventually hosting multiple decentralized apps (DApps) to address Ethereum’s scalability issues.

But today, RChain is facing a major budgetary shortfall and investor backlash over its alleged financial mishandling, stretching from incomplete balance sheets and the purchase of a million-dollar house, according to documents reviewed by The Block. Not least, management faces scrutiny over a $23.5 million acquisition, for which RChain still owes liabilities of $15m. Meanwhile, its lead developer, Medha Parlikar, quit in October alongside three board members, including CFO, Kate Gonsalves, who resigned on the 7th December. RHOC’s ranking has also dropped from 30 to 211 (accounting for widespread market falls).

CEO Greg Meredith told The Block that RChain’s treasury’s downturn was due to “poor management” by a third-party advisory and “the sharp decline in the crypto market.” But according to four early investors, the problems go far deeper. Several sources asked for anonymity due to potential legal action against RChain, but include members of the Asian investment contingency, who reportedly make up 50% of the total cooperative. They say the group is “very upset” with RChain’s lack of accountability and what they describe as “reckless investments.”

And they want answers.

The first red flag, sources say, was the $23.5 million purchase of a 5-year license for an audio codec by Immersion Networks. Immersion’s technology is helping to build the Rsong app, which allows users to rent songs in high-definition from the RChain blockchain.

Investors doubted not only the deal’s relevance to the development of a high-transaction blockchain but also the enormous price tag – given RChain only raised $31 million. They also say the full amount was not disclosed to them until two months later.

“I’m not saying it’s not a good piece of tech. But it was a crazy amount for what we had. Let’s say you’re building a house for yourself and it’s $1m. But then you find a nice piece of furniture and you blow half a million on it. And now you don’t have enough to finish the house and you’ve completely destroyed the main project you’re working on,” said one investor.

“[Greg Meredith] sold the company to investors by saying we would be part of the decision-making process. But he made an investment that was outside his realm of expertise without consulting experts who could give him a strategic vision,” said another.

Ironically, Immersion’s COO acknowledged to The Block that “Immersion is a very small component of the App,” which begs the question: why was such a large amount of money spent?

When approached for comment, Meredith defended the purchase, saying RSong would be a “flagship app,” with the Immersion partnership serving as a “marketing deal” by showing it is stable enough to deliver audio data.

“The tech is so compelling that artists are literally clamoring to get on,” he said. However, RSong currently only has three songs on it and has been out for over 3 months.

Meredith confirmed RChain was seeking to defer payment for the remaining $15.5 million due until it is more liquid. He also hinted the deal would pay off, saying they were in “ongoing negotiations” around Immersion that could make it “immediately profitable.”  However, RChain – who sources describe as “functionally bankrupt” and dependent on the deal – may not be in a strong negotiating position.

“Even he manages to sell it, to have done it in the depths of the bear market, to take all your remaining funds, to take on debt, is irresponsible. They’ve killed the project,” said one investor.

Indeed, the last updated balance sheet, published in October, shows RChain Ltd. is in a USD deficit, with an additional $5 million tax bill estimated. It also indicates they hold over 480,000 RHOC, an extremely illiquid position and whose presented-USD value is grossly inflated given current market prices. It’s unclear what, if any, performance, lockup, or milestone-constraints are necessary to utilize these tokens.

Another concern investors have raised is over RChain’s strategic partnership with Pithia, a VC fund enlisted to help build the RChain ecosystem.  Pithia was loaned 105 million RHOC tokens in 2017 (then worth more than $1 each) to “find and fund” 12 start-ups, in exchange for keeping 20% of any profits they returned.

However, the companies renegotiated the contract in August 2018 with an unusual new clause stating that if RChain failed to launch its central Mainnet platform by March 31st, 2019, Pithia could terminate the contract and keep any remaining RHOC.

“That just makes no sense,” said one major investor, who invested $1 million in RChain. “By way of metaphor, it’s as if Tim Cook [of Apple] invested money in a hedge fund which supports startups listed the app store. But in the deal, Cook agrees that if Apple is late on releasing the iPhone, the hedge fund gets to keep the whole investment and they don’t return anything.”

In October, Pithia’s CEO Lawrence Lerner exercised his right to terminate the partnership after RChain announced it was delaying the launch to April 1st – just one day behind the agreed schedule.

“This is crazy. If you think you cannot complete something in time at least you try. Or at least you wait so that you pay the penalty on the last day…It looks like this letter was sent on purpose to ensure that Pithia gets the tokens even if they successfully deliver Mainnet in time,” suggesting that Meredith oversaw “a backroom deal” with the firm. 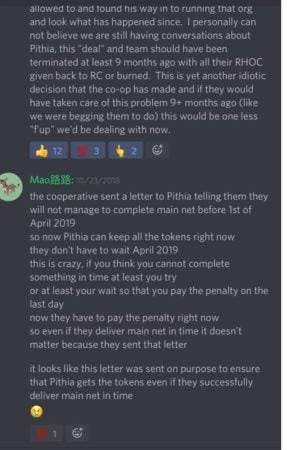 “My suspicion is that Greg was still a shareholder in Pithia [which used to be called RChain Holdings] when the deal was made. He had a huge influence over the delay, so it’s strange,” one source interviewed by The Block noted. He also questioned why RChain had chosen to renew their contract with Pithia, after investing in only four startups since March 2017.

In turn, questions are surfacing around what Pithia did with its 105 million RHOC tokens, with their wallet down to 63 million RHOC at the time of publication. Only around 11 million are accounted for as startups funding and as repayments to RChain. Sources say that their demands for a full audit of Pithia and legal action against them were shut down by Meredith.

Attempts to seek clarification from Pithia’s CEO on why so many RHOCs have been liquidated were inconclusive.

Finally, questions have arisen over Greg Meredith’s management and the board’s independence – which includes Vlad Zamfir (a leading Ethereum researcher), and where there are now four empty seats.

“Greg basically runs it like a dictatorship,” said a source. “Every time [investors] try to speak out they get shut down. It’s hugely centralized. The board members are his friends. How could the board have approved [a $23.5 million aquisition] seeing the state of the balance sheet?”

RChain’s CEO confirmed that he and Vlad Zamfir are “very good friends.” However, he notes Vlad was not present on the Immersion vote.

“Greg is a brilliant person. That’s the sad thing,” said one investor of the CEO. “He’s an exceptionally brilliant computer scientist, but he’s not much of a business leader,” one large private investor, Kevin Huynh, said.

In particular, sources questioned Meredith’s decision to buy a $1.5 million house in Seattle for cooperative members to stay in.  A Reddit post labeled, “Sketchy things going on at the RChain Co-op,” also noted the concerns.

“We’d like to see an updated balance sheet,” said Mervyn Chng, an investor, hoping to understand what the company’s financial health looks like today.

“I think this is what happens when you give blockchain founders too much money, too much power. Suddenly the ball drops that they’ve spent $23.5m,” said another investor. “I’ve given up on the co-op.”

Still, Meredith remains optimistic. “We’ve engaged in immensely lucrative deals. We’re in quite solid negotiations and we expect a fairly significant announcement in Q1,” he said. And regarding rumors he has been begged to leave by investors, Meredith said, “I’m always going to step down, that’s the point of a decentralized project.”

Can RChain’s management reverse the so-called ‘death spiral’ and keep the dream alive?

Photo by Emily Morter on Unsplash

The post RChain cooperative ‘functionally bankrupt’ after questionable deals, with investors and developers losing faith appeared first on The Block.

Ripple CEO: Ripple is Just One Participant in Ecosystem

Bitcoin v. crypto-stocks – Why it’s not worth betting on just one

Why it’s best Cardano’s traders remain on the lookout

Coinbase halts Bitcoin SV trading after yet another 51% attack

Bitcoin v. crypto-stocks – Why it’s not worth betting on…