The crypto-market remains largely bullish, especially since yield farming and the success of DeFi tokens have been appealing to many investors. With Ethereum priced at above $400, at the time of writing, the world’s largest altcoin can, in the medium term, signal more bullish sentiment for itself and the rest of the altcoin market.

At the same time, Binance Coin and VeChain were trading near important levels on both the short and long-term charts. Maker, however, had retraced after surging by nearly 25%, despite the fact that it could now be readying itself for another potential rise. 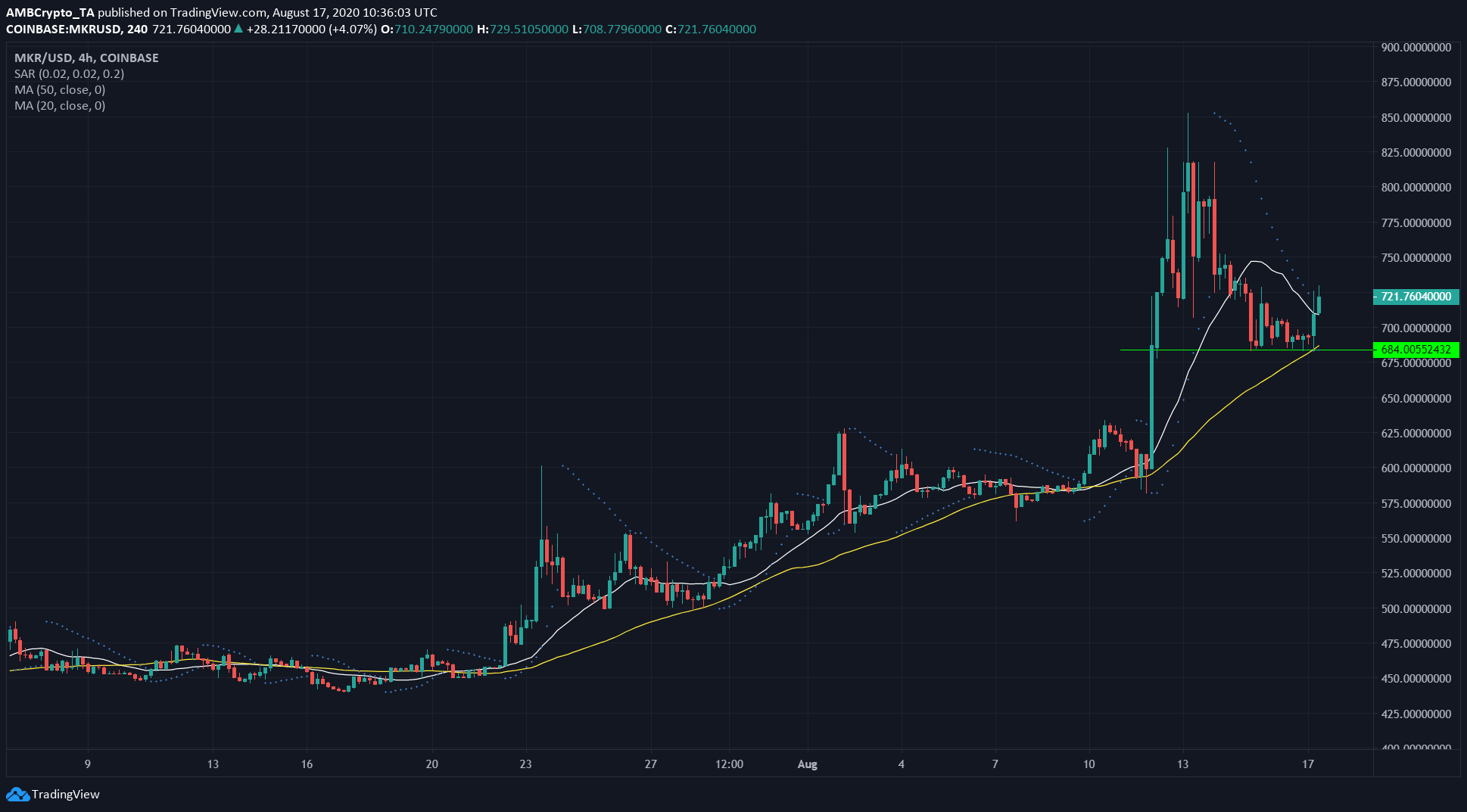 MKR found its support levels around the $684 region. The Parabolic SAR’s dotted markers were forming under the price with the 20 SMA (white) above the slower 50 SMA (yellow), a sign suggesting that the price would rise.

The crypto-asset might be able to reach new highs near the $800-mark if the interest in DeFi continues to soar. 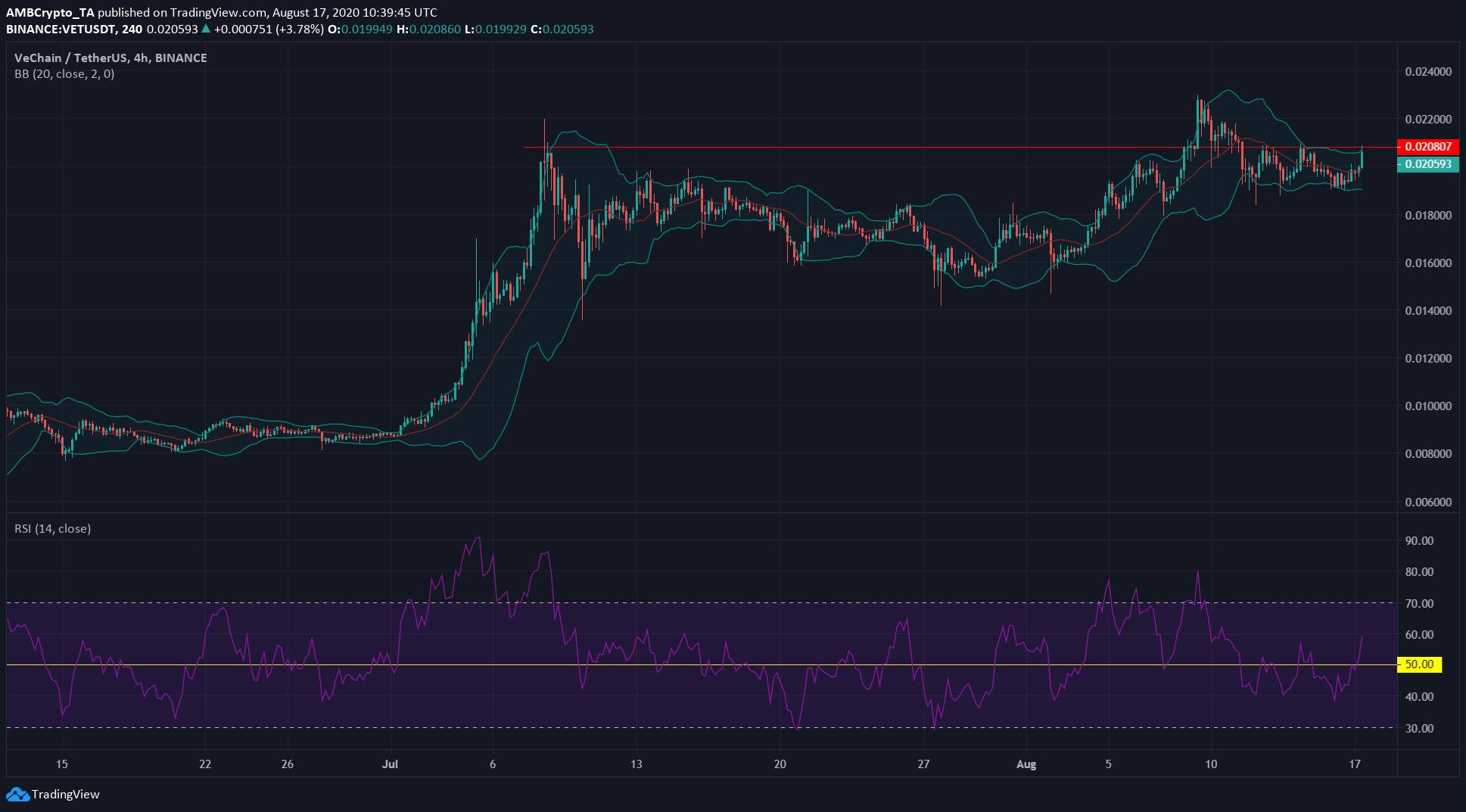 For VeChain, the month of August hasn’t seen it continue on its incredible uptrend from the month of July. The presence of a strong resistance level at $0.0208 halted some of the progress made. Ranked 21st with a market capitalization of $1.15 billion, this level could change if the resistance is breached by VET with momentum.

The RSI had stepped out of the bearish side and was noting a value of 59, at press time. If VET’s RSI reading can remain above 50, after the breach of the neutral line, it might mean that VET will go on another uptrend.

The Bollinger bands were relatively tight on the charts, with VET’s price above the 20-period moving average. Further, VET was trading just below its resistance at $0.0208. Failure to rise beyond that level can see VET revisit the $0.0193 zone. 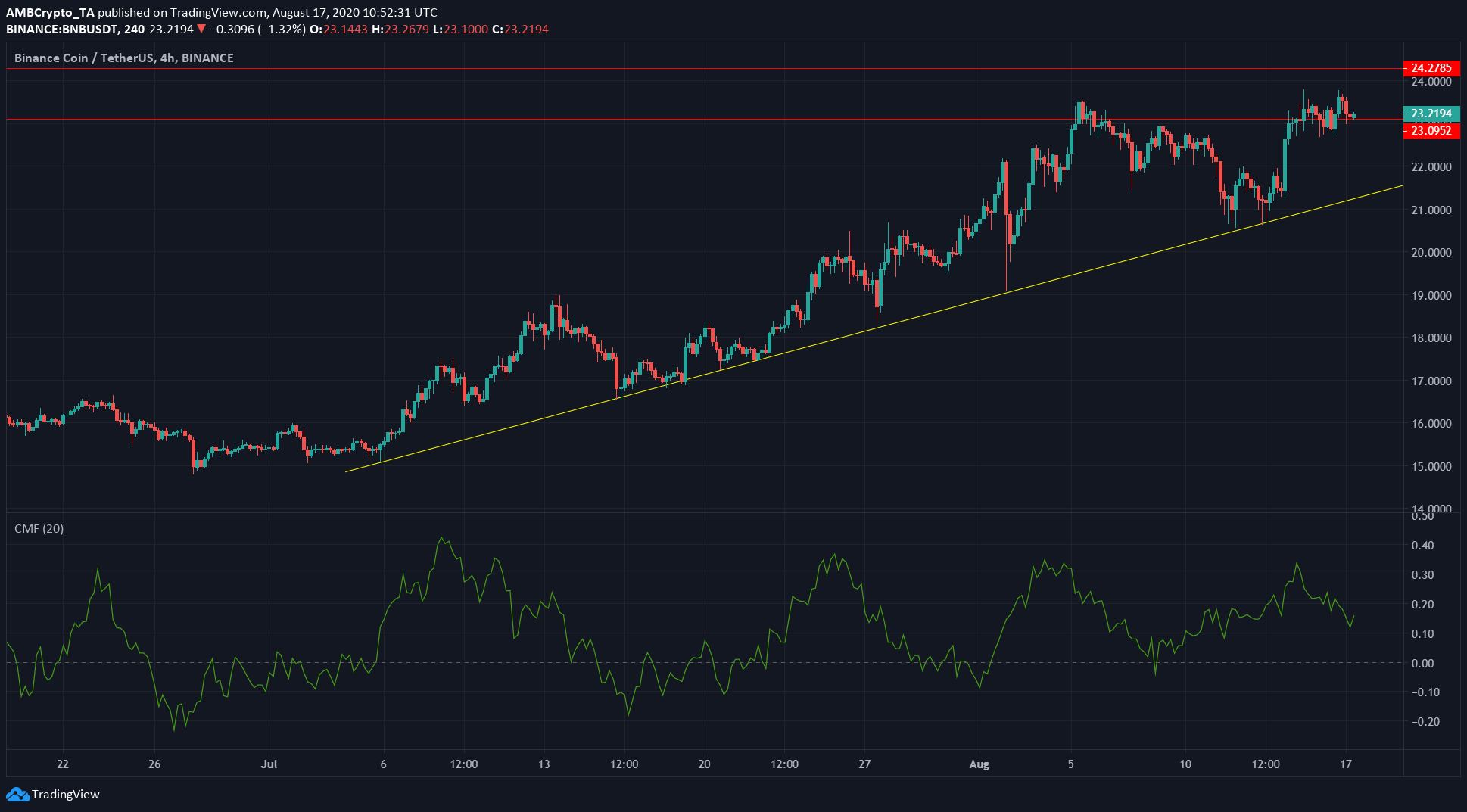 Binance Coin had a 24h trading volume of $251.3 million, a figure that was a bit lower than the volume that saw it touch $23. This may be a sign that BNB traders and investors are waiting to see if the support will hold.

BNB has been on an uptrend since July first week. It was faced by a resistance level at $23. The Chaikin Money Flow showed money was flowing into the market. As long as this doesn’t change, BNB has a good chance of brushing past its resistance at $23.

If BNB breaches $23, it will be faced with another resistance near the $24.2 region, which is a level that has been important on the longer time-frame as well.

Failure to break the resistance can lead to a drop to its $21.75 support. At press time, BNB held the 11th rank on the charts with a market capitalization of $3.35 billion.

Bitcoin trading – Are we in for another sell-off?