KuCoin, one of the world’s most prominent crypto-exchanges by trading volume, was reportedly hacked earlier today. While exact details are yet to be known, $150 million worth of funds were moved out of KuCoin to an unknown address. The unknown address in question has since been doing test transactions, with the funds still with the address, at the time of writing.

In a statement released a while back, the exchange tweeted,

(1/4) We detected some large withdrawals since Sep 26 at 03:05 UTC+8. According to the latest internal security audit report, part of BTC, ERC-20 and other tokens in KuCoin’s hot wallets were transferred out of the exchange, which contained few parts of our total assets holdings

KuCoin also went on to announce that an extensive security audit is being done at the moment, adding that to ensure the safety of other funds, all user withdrawals and deposits have been suspended too.

Here, it is interesting to note that as of press time, KuCoin hadn’t deemed this incident to be a “hack.” Instead, the exchange is looking into the case as a “security incident” alone, despite the fact that the situation has all the tell-tale signs of a hack.

It seems #Kucoin got hacked.

Usually, after being hacked, the $BTC outflow increases rapidly and then becomes zero. Since 20:00 UTC on September 25th, the outflow has continuously been zero.

The crypto-exchange was also quick to reassure users about fund losses, revealing that any such loss “will be covered completely by KuCoin and our insurance fund.” CEO Johnny Lyu will reportedly be doing a livestream later to address the incident.

The reaction to the security incident, as expected, wasn’t friendly, with many users calling out what they felt was a lack of transparency and formal communication in the immediate aftermath of the “security incident.” For its part, however, KuCoin has asked for more time to do a proper review of the situation.

The confusion and the alleged lapse in communication on the management’s part have also led to KuCoin shares ($KCS) dropping significantly by 10-15%. 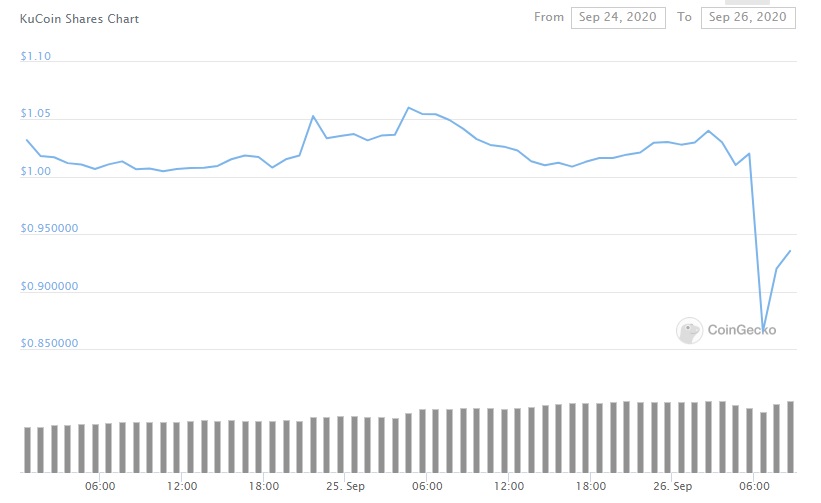 This article will be updated as the story develops…

Another record-breaking WBTC mint – Bitcoin demand on Ethereum to grow?