Is Chainlink riding the DeFi bubble?

The cryptocurrency market has been seeing decentralized finance [DeFi] driving growth in the crypto-verse. Recently, on 9 August, the total market cap peaked at $11 billion, however, at press time was back to $9.275 billion, as per data provider DeFi Market Cap. As the market cap moves higher, the total value locked in DeFi was also just a few steps away from reaching $5 billion. 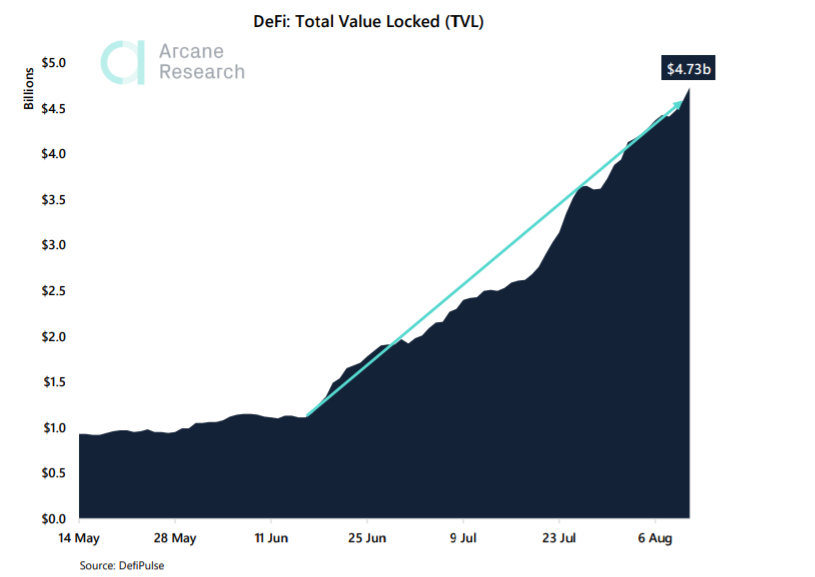 Most of this growth was contributed by the yield farming frenzy and the launch of Compound’s governance token in June. While yield farming was channeling a huge amount of cash into the DeFi ecosystem, the launch of COMP token resulted in a growth of 326% since 16 June, from $1.1 billion to $4.7 billion.

DeFi’s lending market noted the largest growth accounting for a total of $2.9 billion in TVL, while Maker was responsible for $1.5 billion of this value. As DeFi witnessed growth, more and more protocols were entering the market launching their own tokens. This has been, in turn, driving more value into other protocols. According to data provided by Arcane, the governance tokens have been posting strong returns with an impressive 82.6% return in 14 days.

Whereas, decentralized oracle network, Chainlink, used in DeFi apps like Synthetix has been gaining a lot of attention. As LINK’s trading volume surpassed that of Bitcoin’s on Coinbase, over $20 million worth of LINK short positions were liquidated on Aave over the weekend. LINK’s exploding price moved above $14, wherein the net worth was indicated to be 299.66. As per reports, a trader noted that there was a $16 million LINK position, along with a series of “$1m+” positions, that was liquidated on the crypto futures platform.

The Chief Strategy Officer at CoinShares, Meltem Demirors, called it an “elaborate marketing plot” to rally support and drive the price of the digital asset higher. However, there have been speculations of the DeFi itself being a bubble waiting to explode.

The post Is Chainlink riding the DeFi bubble? appeared first on AMBCrypto.