How can crypto-users brace for the next PlusToken or OneCoin?

Cryptocurrencies, like any other financial asset, have long been used for ransom by illicit actors. Over the years, there have been multiple crypto-scams and Ponzi schemes that have managed to siphon a huge amount of cryptos directly from users, while others have attacked third parties like exchanges with Ransomware or DDoS attacks.

Impersonation scams have also emerged recently, with repeated cases calling attention to the fake profiles of prominent personalities in the space. In fact, just recently, a Twitter user @FransZoveel alertedBinance U.S. CEO Catherine Coley about one such incident, one where the impersonators were messaging people to follow the fake account in an attempt to lure them into sending Bitcoin or other altcoins.

Despite many like Coley and Binance’s CZ bringing the community’s attention to such scams, people continue to fall for them, especially on social media platforms. Why is that the case? Well, it perhaps has to do with our failure to identify how these scams operate.

You’ve got a scam

Researching before investing in a project is usually the first thing one does. However, what if the project you are investing in is new? There have been multiple cases wherein people have created fake projects or ICOs and launched their own coins to swindle money from people.

One such prominent scam was PlusToken. A $3 billion scam that targeted at least 3 million victims, it utilized mixers, OTC brokers, and more to launder and cash out funds. However, according to a recent update, all 27 suspects thought to be responsible for running the PlusToken Ponzi have been arrested by the Chinese police.

While they may have been arrested, the pall of their crimes continues to linger. The scamsters used the promise of quick profits to prey on gullible users, a well-versed trick in a con artist’s playbook. And while over the years laws and regulations have tightened, many continue to fall victim to get-rich-quick schemes.

In fact, back in 2019, scams made up a majority of cryptocurrency-related crimes, accounting for a whopping $8.6 billion in transactions. Further, were it not for just three separate large-scale Ponzi schemes, the crime would account for just 0.46% of all cryptocurrency activity. 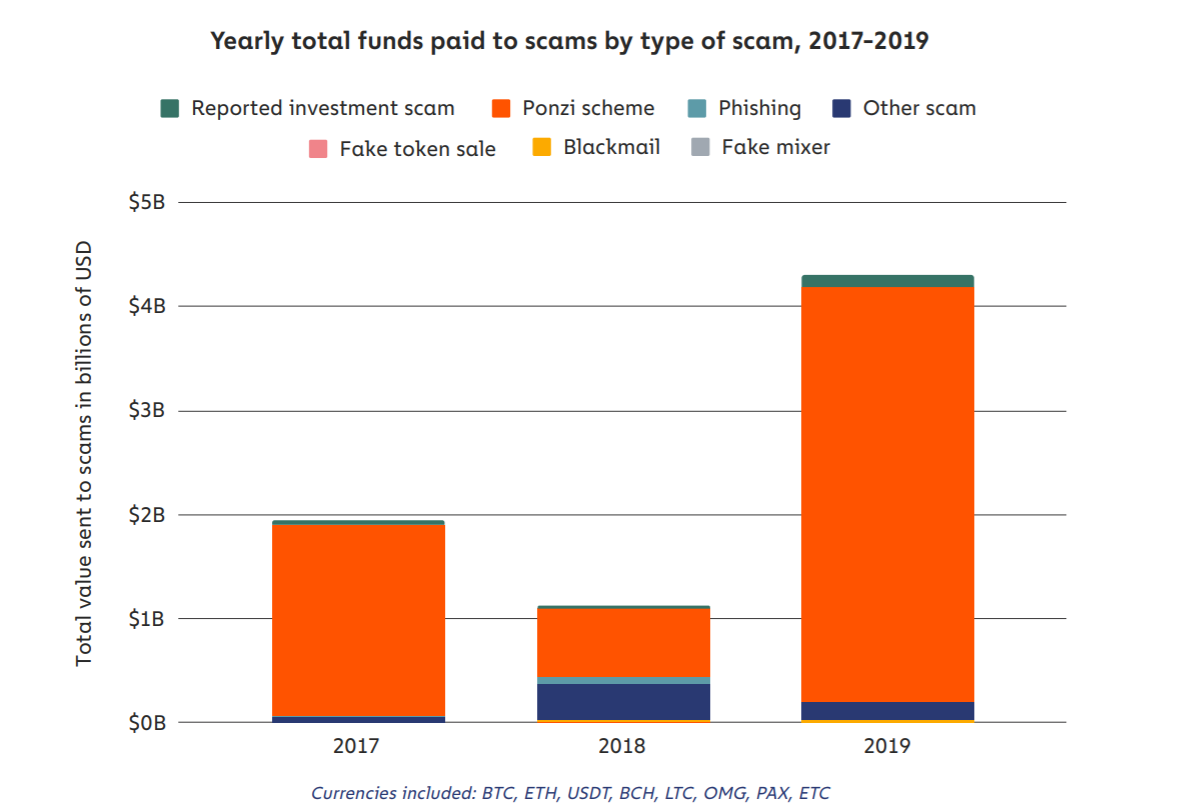 As per data provided by Chainalysis, the average transfer to Ponzi schemes was worth $1,676 in cryptocurrencies. This was possible as the scammers promised massive, outsized returns to anyone who invested in their fake companies. These Ponzi scammers also created sophisticated websites and ran aggressive marketing campaigns to attract investors.

Another sophisticated crypto-scam was OneCoin. The Ponzi scheme raked in a huge sum of $4 billion from people all around the world, but its creator Ruja Ignatova still remains at large, despite her brother Konstantin Ignaov pleading guilty to several charges, including money laundering and fraud in November 2019, as per reports.

Another member of the OneCoin cult was recently found guilty of promoting the scam. According to reports, Fok Fook Seng was fined S$100,000 for marketing OneCoin between January 2016 and June 2017. Seng was also charged back in April 2019 under the Multi-Level Marketing and Pyramid Selling [Prohibition] Act.

Identification is the Key

Now that we know what OneCoin and PlusToken were, the question arises – How did people not see them for what they were before? More importantly, can scams like these be identified in the future to avoid gullible people falling victim again?

Well, when the PlusToken scam was around, many from the industry had voiced concerns about their aggressive marketing and their ‘too good to be true’ promises. However, there was not much done to highlight these issues in an objective way. After all, the space is full of people shilling their own projects while dissing others. Why would one take it seriously if people were raising questions about an emerging project that promised the world?

What is key here is that users must understand that there is no free money in the world and no scheme can “guarantee” appreciation of investments.

Apart from that, many investors have also suggested that users first check the locus standi or the place of the standing of the institution where one is investing. They should also go ahead and question the institution about the future of investments while clarifying refund rules. While no business can assure returns, one can identify Ponzis by looking at schemes that promise the same in a bid to create trust and to attract more customers, with suspicion.

The pace with which crypto-regulations are taking shape in countries such as Japan and Switzerland is commendable. However, most are still struggling to understand it.

While laws and regulations do take time, the consumer protection implications of scams such as PlusToken and OneCoin continue to loom larger than ever. Until these regulations are up to scratch and agencies have the resources to investigate any wrongdoing, users must be smart enough to be on their guard against such schemes.

The post How can crypto-users brace for the next PlusToken or OneCoin? appeared first on AMBCrypto.

How can crypto-users brace for the next PlusToken or OneCoin? written by Namrata Shukla @ https://eng.ambcrypto.com/how-can-crypto-users-brace-for-the-next-plustoken-or-onecoin/ August 8, 2020 Namrata Shukla