Don’t be fooled – Bitcoin is stronger than gold

If you were to use one word to describe the Bitcoin market right now, it would be “strong.” For the past three weeks, the world’s largest cryptocurrency has been trading at a level over $10,000, a feat it has managed only 14 times since the 2017 bull run.

Prior to this run, Bitcoin was in a flux. Trading in a sideways channel for over three months, the cryptocurrency’s realized volatility dropped to its lowest point since March 2019. During this time, the volatile and uncorrelated aura of Bitcoin amidst the flailing markets of the world was shifting away from the cryptocurrency to the chief commodity of them all – Gold.

Between March and July 2020, the per ounce price of gold shot up by more than 20 percent, reaching an all-time high over $2,000. In a market where Bitcoin is trading stable and gold is surging, you know something is amiss. 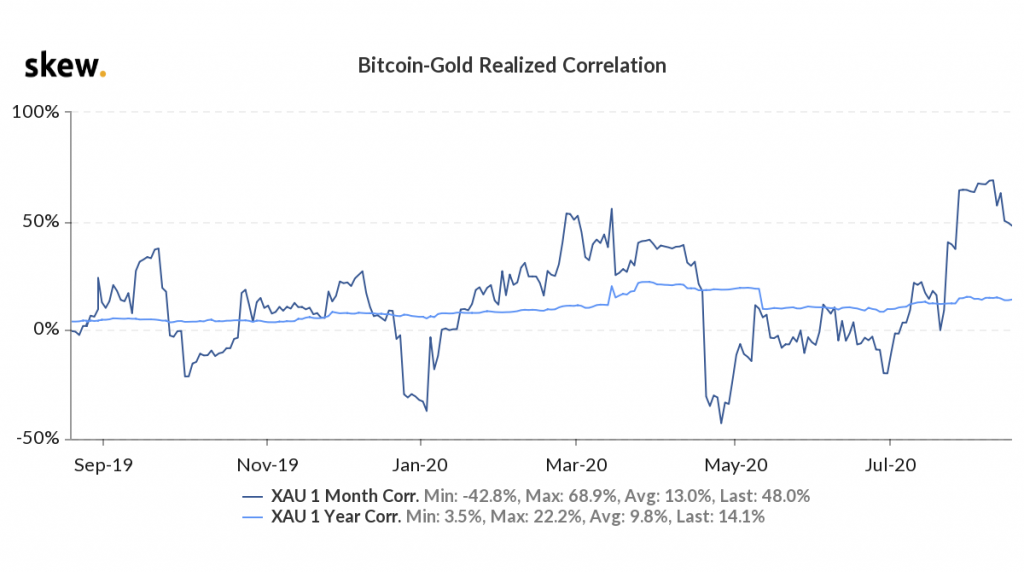 For a brief few days, however, both digital gold and real gold saw eye-to-eye. According to data from Skew markets, beginning on 21 July, as the price of Bitcoin began to surge from $9,200, the correlation between Bitcoin and gold began to skyrocket. By 10 August, the realized 1-month correlation between the two macroeconomic assets had reached an all-time high of 68.9 percent, before the commodity lost its sparkle.

It should be noted that during this period of rising correlation, Bitcoin endured a massive drop as a consequence of a ‘bull trap’ on 2 August. Within the same hour, as the cryptocurrency’s price pushed above $12,000 for the first time in over a year, a major sell-off ensued. After the breakout, a number of sell-orders were triggered, pushing the price down by 8 percent below $11,000 in one fell swoop.

Despite this quick and significant drop, Bitcoin’s price endured, pushing up above $11,000 before the day’s end and moving close to $12,000 the following week.

The same cannot be said for gold, however. Beginning on 7 August, money started flowing out of gold. In the next 4 days, the per ounce price of gold dropped by 7.14 percent – its biggest single-day fall since the pandemic-induced market fears began.

Comparing the Bitcoin and gold drops, both of which were 5 days apart, the case of strength of the market can be estimated. Even with the cryptocurrency’s price dropping by 8 percent within the hour, within a few days, the lost value had been recovered, and $12,000 was retested. On the contrary, for gold, the drop wasn’t recovered, or at least hasn’t been recovered yet, and it is unlikely to do so for the next few months.

In terms of the larger picture, despite the rise and fall of Bitcoin, and the stability of the yellow metal, one is clearly stronger than the other. And it’s not the one you’d expect.

The post Don’t be fooled – Bitcoin is stronger than gold appeared first on AMBCrypto.

Bitcoin and miner capitulation: Was the threat ever real?