Despite Ethereum’s recent growth, its mid-term rally could be at risk

Ethereum has been on a wild ride over the past couple of weeks and has been outperforming the largest cryptocurrency, Bitcoin. After an extended period of consolidation, ETH has witnessed a stellar rally of around 88% rising from $236.97 to $445.4 within a month. These gains have been often linked with its correlation with Bitcoin, DeFi expansion, and the use of stablecoins on the blockchain.

Ethereum has proved to be one of the safest long-term assets in crypto, but certain analysts believe its medium-term rally may be under threat. Santiment on Twitter presented its findings through the chart below: 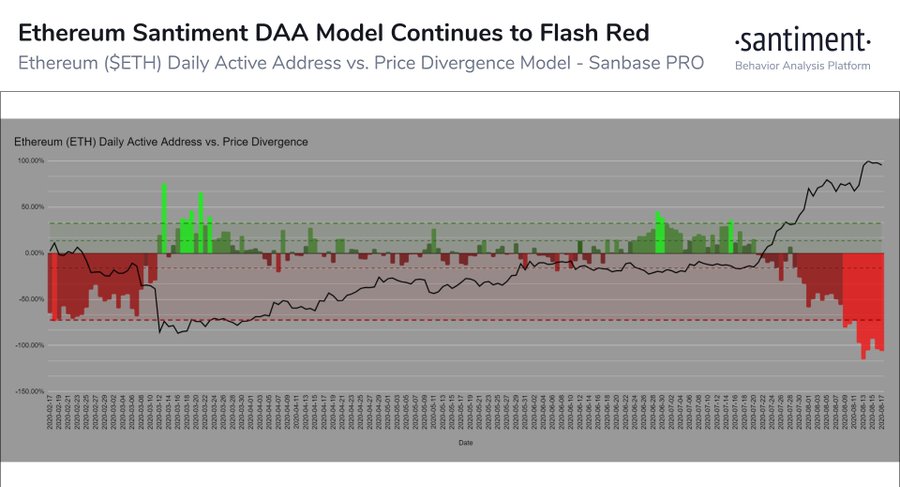 As per the data analysis firm, Santiment, Ethereum’s price may undergo correction as the above chart indicated a concerning lack of unique addresses transacting on the network in order to maintain its current market cap.

Along with high value, other on-chain metrics like transaction count and transaction fees also remained high, which were positive signs for the coin in the long-term. The ETH transaction count marked ATH at 1.34 million this week. This level was previously seen in January 2018, wherein the average price of ETH was $1,042. Santiment added:

One of the reasons for the daily active addresses to remain low could be the high transaction fees that end up discouraging the interest of traders in the ETH market, along with the intricacies of DeFi. However, unless, Ethereum’s active addresses notice a turnaround and surge again, the viability of Ethereum’s mid-term rally will be put to test, as per Santiment.

The post Despite Ethereum’s recent growth, its mid-term rally could be at risk appeared first on AMBCrypto.

Despite Ethereum’s recent growth, its mid-term rally could be at risk written by Namrata Shukla @ https://eng.ambcrypto.com/despite-ethereums-recent-growth-its-mid-term-rally-could-be-at-risk/ August 19, 2020 Namrata Shukla