DeFi is the latest hype machine in the crypto-market. It has evolved from simply earning interest by locking crypto to Governance tokens and being able to trade these derivatives. As of 01 January 2020, the total value locked [TVL] in DeFi was just around $675 million. However, as DeFi, governance tokens, and yield farming mania reached a peak, this value rose to $9.6 billion – a 1,322% increase in 9 months.

Hence, this article takes a look at DeFi, its hype, and how it all began – perhaps, the origin of DeFi 2.0 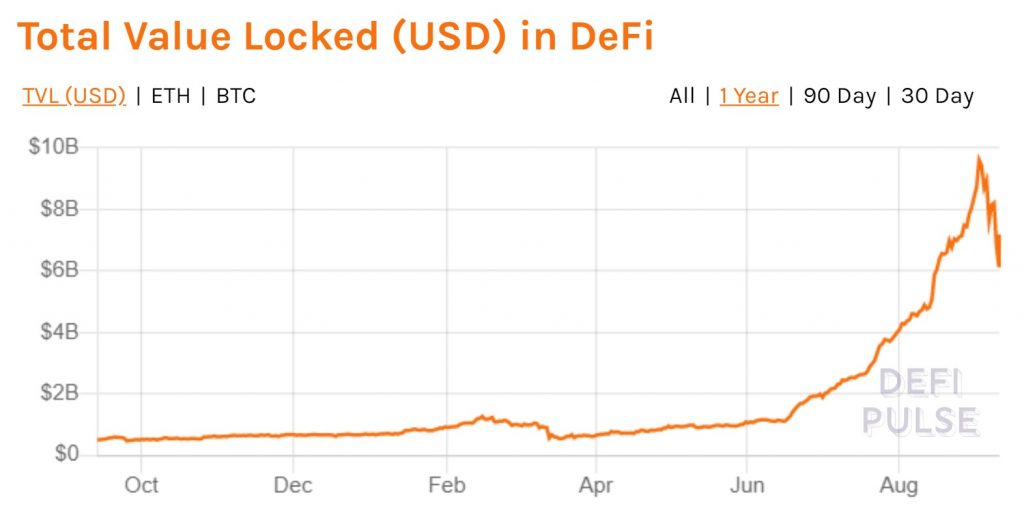 Even in retrospect, this seems unreal and unexpected. As a person who sat on the sidelines and watched multiple DeFi coins get the center stage and the spotlight, it still feels unreal how similar this is to the pre-bull run era of 2017.

Most people who experienced the bull run of 2017 known the euphoria was palpable.

In the deep, dark, and anonymous corners of Telegram, pump and dump schemes were being planned and huge scams like Bitconnect and plenty others were thriving. On one hand, every day, a new ICO with a new whitepaper and dream would gain prominence and its price would surge.

On the other hand, Bitcoin was growing stronger and so was the price speculation, both of which pushed it to new all-time highs. As the world caught a glimpse of Bitcoin’s achievement, the underbelly of crypto, which was infested with scams and bad actors, was also exposed.

At this point, government and concerned authorities stepped in to protect investors’ money and interest, especially since the technology was new and complex and the ecosystem was largely unregulated.

Very similar and along the same lines is the story of DeFi and how it fueled the temporal rally of Bitcoin and most of the crypto-ecosystem with Governance tokens in the thick of it.

DeFi and its evolution into DeFi 2.0

Although hopes and expectations for DeFi were high, they appeared to be unreachable. Largely faced with buggy code, unaudited smart contracts, and pseudonymous developers, DeFi was still a no-go for institutions. And, it still is. However, between then and now, a lot has changed and the catalyst that turned the embers of DeFi’s hopes into a bright burning flame was – Compound.

Vitalik Buterin’s reply to that was simple, yet confident – no and things in lending/borrowing space would blow over.

Regardless, come June, Compound – a trusted platform for lending and borrowing crypto-assets, launched a governance token that would take users in the DeFi ecosystem by storm.

On 16 June, Compound launched “COMP” – a governance token that would replace the team of Compound Protocol; people who held the tokens were allowed to participate in any and all changes made to Compound.

“The individuals, applications and institutions that use the Compound protocol are capable of collectively stewarding it into the future — and are incentivized to provide good governance.”

COMP token’s allocation was simple and it worked wonders for the platform. It became the most valuable token on its first day of trading. The price of COMP went from under $90 to $100 on the first day and $372, 5 days after its launch.

Trading at $98.6 per COMP put its market cap at $1 billion, making it the largest DeFi token by a fully-diluted market cap. In fact, COMP surpassed the long-standing, governance pioneer token – Maker.

Needless to say, the COMP token took off.

To maximize their yield on COMP returns, users on Compound would use USDC as their collateral and get USDT in return, which would then be swapped for USDC on Curve, the borrowed USDC from Curve would go back to Compound. A repetition of these steps would accrue large interests. However, it was risky.

Since doing it manually would take a lot of time and errors, InstaDapp developed a tool that would automate the leveraging up to 4x.

Shortly thereafter, Balancer Labs – a dex, launched BAL tokens that can be used for governance and as a reward to users for providing liquidity. Following Balancer Labs was Ampleforth and many others.

Not only did platforms like Balancer, Curve, 1Inch, etc. join the revolution, but one-at-a-time, they launched governance tokens. This was history repeating itself but with a slight variation – This was quite similar to when exchanges launched exchange tokens.

While the yield farming frenzy was evolving into a mania, people began to take notice and pour their money into it. Most DeFi platforms were into yield farming – Compound, Balancer, Curve, bZx, Aave mStable, you name it. Some platforms made the cut, others got exploited due to a buggy code or smart contract. Even 3 Arrows Capital, an institutional player backed Aave [lending platform] with a $3 million investment.

Some platforms even pre-liquidity-mined these tokens and made good profits. All of this and it was only July, with $3 billion in TVL in the DeFi ecosystem.

Working silently amidst all the yield farming craze was Andre Cronje who launched yEarn – a yield aggregator that redirects users’ deposits to lending markets offering the best rates.

“Each of these systems have control mechanisms, configurable fees, maintenance controls, and rules that can be modified. Thus far, these have been managed by us. In further efforts to give up this control (mostly because we are lazy and don’t want to do it), we have released YFI…”

YFI’s launch was felt by CT, not just because it was another yield farming platform with a token that would earn them money, but due to the nature of its launch. Cronje mentioned in the same post that the token was,

“a completely valueless 0 supply token. There is no pre-mine, there is no sale, no you cannot buy it, no, it won’t be on uniswap, no, there won’t be an auction. We don’t have any of it.”

CT considered this a fair launch. Although priceless to begin with, YFI hit a whopping $40,000 per token, surpassing even the king crypto – Bitcoin, in terms of the price.

Yes, the DeFi ecosystem was hit by a breath of freshness due to Cronje’s fair launch of yEarn and YFI, but there were many that were willing to take YFI’s place and popularity.

Below is a chart showing popular DeFi tokens and their price performance. 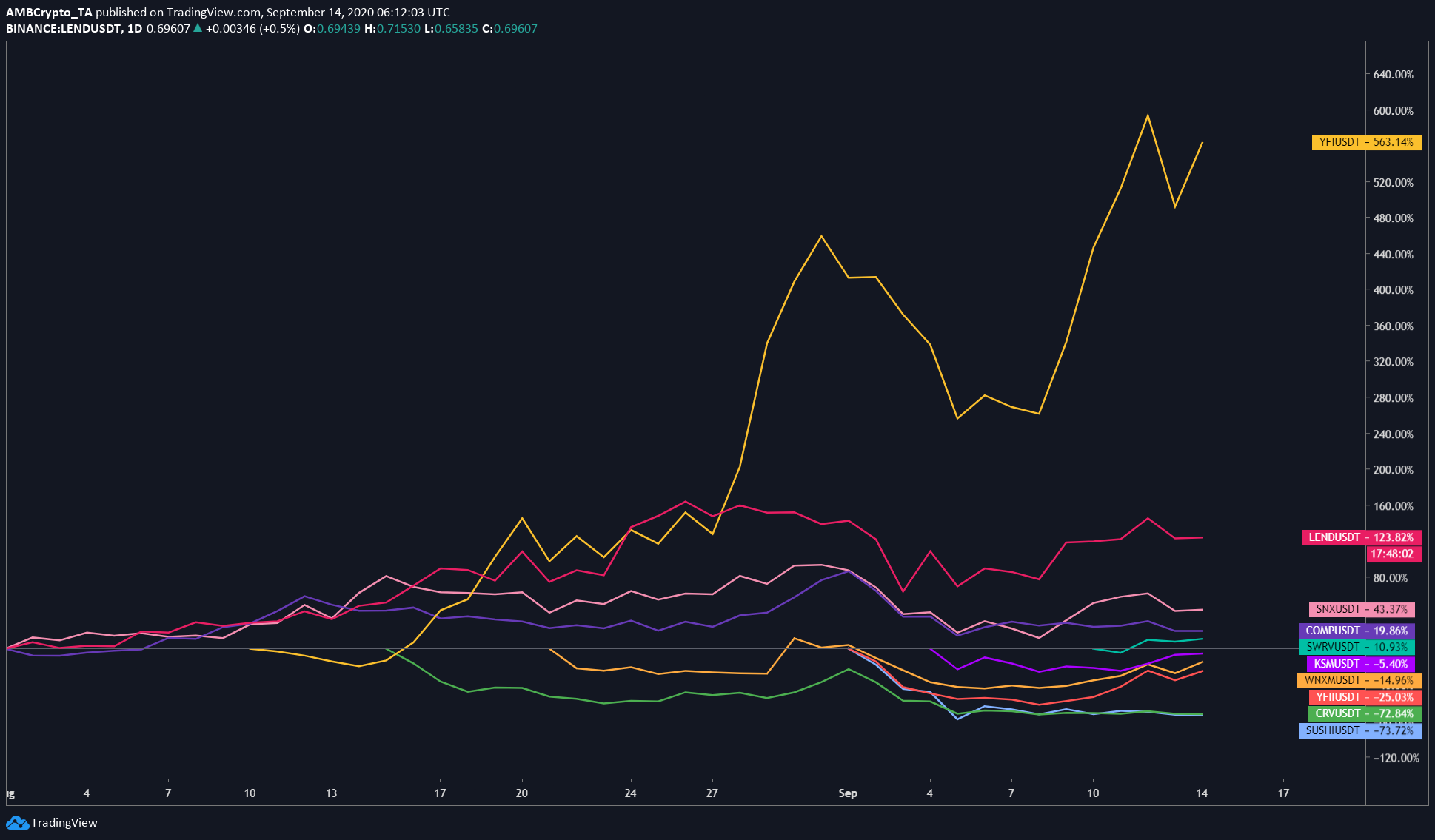 Something else was cooking[pun intended] in the DeFi ecosystem – new players and new tokens that would compete with YFI to be DeFi’s darling.

Something changed in yield farming and that was when food coins started to gain prominence with Yam. It was a protocol that combined Ampleforth and memes together with the aggressiveness of yield farming, all packaged into a single platform and coin.

Second week into August and a day after Yam’s launch, users started to pour money into an unaudited platform called Yam Finance. Yam Finance had about $400 million worth of liquidity 24 hours after its launch. Similar to YFI, the Yam token was born with zero value and the price hit almost $160 at one point, putting its market cap at $57 million.

Suddenly, Yam was the DeFi darling, and assets from Balancer, Curve, and even Yearn fell by 16%, 24%, and 38%, respectively, according to DeFi Pulse.

However, tragedy befell Yam when it was ‘rebase’ time.

DeFi’s weakness and bottleneck all come down to one aspect – the wellness of DeFi/yield farming protocol’s smart contract. Even with DeFi’s TVL hitting $8 billion, it is still in pre-pubescent stages.

According to reports, there was a bug in the unaudited code, one that effectively meant the protocol would keep printing “dud” YAM tokens that would prevent token holders from making any governance decisions. The project was announced dead at 8:00 UTC by the co-founder Brock Elmore. Attempts were made to revive the project, but users looked ahead.

After the ephemeral rise and fall of Yam, Curve and the team behind it was preparing to launch their own governance token, but a Chad, out of nowhere, picked up the smart contract code and launched Curve DAO, frontrunning the creators.

Yo, @CurveFinance ! Saw your DAO is ready to rock and I gots to MAXIMIZE MY ALPHA ! So I went ahead and deployed it for you. Get at me in DM to verify and lets get this party started!! pic.twitter.com/D0KqEg4Ldr

Although the founders disagreed that it wasn’t an official launch in Discord groups, they came around to Chad’s pre-launch.

So, Curve DAO and $CRV token are launched by https://t.co/26L8Wt13oe, we had no choice but to adopt it. The launch has happened https://t.co/5EQDwbknmP

While the CRV token is still up and running, its launch is something people will never forget.

With Yam facing an untimely demise due to its bugs, there was a new player in the DeFi town – Sushi. The Sushi team positioned itself as “an evolution of Uniswap with SUSHI tokenomics.”

While Sushi performed exquisitely well, its founder, Chef Nomi, decided to exit the project with $14 million worth ETH. Facing backlash from the community and multiple Twitter threads from FTX’s CEO Sam Bankman-Fried, the chef handed over the reins of the project to SBF. However, a few more Twitter threads later, the founder decided to return the funds and help the platform grow.

As of now, the Sushi token is still under $2, but it is common knowledge that the coin pumps when there is an announcement from the official Sushi account or on the back of any Sushi-related development threads from SBF.

As of this writing, the team had also initiated a $14 million buyback of the token and unlike every other time, the coin dumped 16% in 30 mins or so.

Last, but not least, is the MEME token which was literally developed as a joke, but the coin has gained some serious traction. ConsenSys’ DeFi product lead Jordan Lyall created “The Degenrator” as a joke since there were plenty of Defi coins popping up – Sushi, Yam, Tendies, Kimchi, Burger, etc. Less than a day later, and Meme is closing in on $1 million in daily trading volume.

After Andre Cronje’s Twitter thread about the coin, the token has pumped by 153%, pushing the coin from $98 to $248 in less than 5 hours.

Well, to circle back to the original point – the hype around DeFi; there is plenty of hype untapped in the DeFi ecosystem. However, it is undeniable the number of similarities today’s crypto-ecosystem shares with the 2017 ecosystem.

While this is helping a lot of people make quick but huge profits, it is also complicated enough for all of retail to FOMO into it. However, this may change in the near future. The conclusion to this is that the bull run is inevitable and so are scammers and swindlers waiting to steal money from less-knowledgeable users. Hence, it is advised to do thorough research before getting into yield farming or DeFi.

DeFi as a concept holds a lot of power. With proper projects, it could take off and even attract large users and perhaps institutions, just as Bitcoin has. Regardless, it is still in its early stages and has a lot of room to grow.

The post Why does DeFi in 2020 have echoes of 2017’s market? appeared first on AMBCrypto.

Why does DeFi in 2020 have echoes of 2017’s market? written by Akash Girimath @ https://eng.ambcrypto.com/defi-and-yield-farming-bubble-as-we-live-and-breath/ September 25, 2020 Akash Girimath

Inside the blockchain developer’s mind: The governance crisis