Cardano, Tezos, and other alts emerge as investors’ choice in July

Cryptocurrencies have had a conflicting Q2 and a dormant beginning to Q3. As the price of Bitcoin [BTC] moved sideways, most of major cryptos followed its lead due to their high correlation with BTC. However, there were various alts in the market that have been successful in grabbing more attention than Bitcoin and Ethereum.

As per a recent report by the investment platform eToro, Bitcoin remained the number one investment asset, with Ethereum in second place in July. Bitcoin gained 7% compared to the previous month’s investments, while Ethereum managed to gain 89%. However, Binance coin which was in 15th position in June in terms of investment volume moved up to sixth position by gaining 521%. Similarly, Zcash jumped from 13th position to seventh by gaining 294% in investment volume. 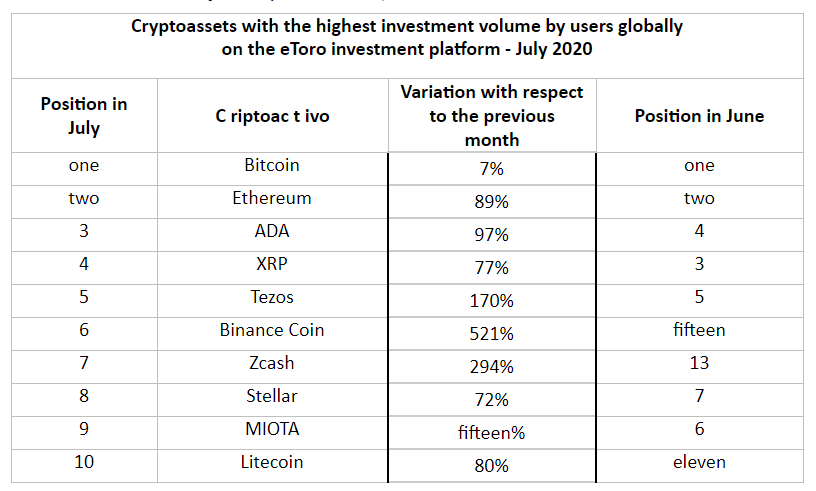 The chart indicates that the majority of retail investors July chose higher performance altcoins like Cardano [ADA] , Tezos [XTZ] , Zcash [ZEC] , and Binance Coin. However, the growth of these altcoins was not just due to a strong correlation with Bitcoin but was driven by an increase in its operation compared to June. Each project had more development taking place, for example, Cardano was preparing for the launch of the Shelley network which took place on 29 July.

According to a recent report from Binance, altcoins even led the top 10 positions in terms of returns offered for USDT-Margined Contracts. VeChain [VET] and Chainlink [LINK] outperformed every other crypto recording 95% and 70% in gains, respectively.  Bitcoin registered 24% returns. Low volatility risk in Bitcoin also played a major role in alts succeeding.

As the market moves towards a speculative bullish market, volatility remains high and the traders are still hedging risks of sudden sell-offs in the BTC market using altcoins.

The post Cardano, Tezos, and other alts emerge as investors’ choice in July appeared first on AMBCrypto.

South Korean Beachgoers Can Now Use Bitcoin to Pay for Services

Cryptocurrency Mining Profitability in 2020: Is It Possible?