Bitcoin Price Analysis: Is this a Bullish Reversal or the Puppet Master at Play? 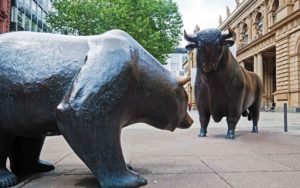 At last some excitement! Yesterday Bitcoin leapt nearly 12% in 24 hours but what’s behind the rally? Could it be the BlackRock and Coinbase news or is it purely fundamental?

What a rollercoaster ride! Earlier this week Financial News London reported that the world’s largest ETF provider, BlackRock, had cast its gaze to Bitcoin and other cryptocurrencies as potential investments but before the news even had the opportunity to impact cryptocurrency prices, BlackRock CEO, Larry Fink came out, denying the news and labeling it as hogwash. Then later in the day, Coinbase retracted their supposed SEC approval announcement, claiming to have jumped the gun.

Currently, it’s hard to determine exactly what’s behind BTCs current run but 2018 has been chock full of positive news regarding the arrival of institutional investors and chartwise, bitcoin appears ready to jump off.

Japan’s SBI Holdings is set to publically launch its VCTrade Crypto exchange and IBM has furthered its partnership with Stellar Lumens in the development of a USD backed stablecoin that operates on the Stellar blockchain.

Generally, it appears that the euphoria cryptocurrency investors enjoyed during the 2017 bull run is building as more and more exciting cryptocurrency news continues to show that the platform institutional investors have been waiting for is nearly complete. 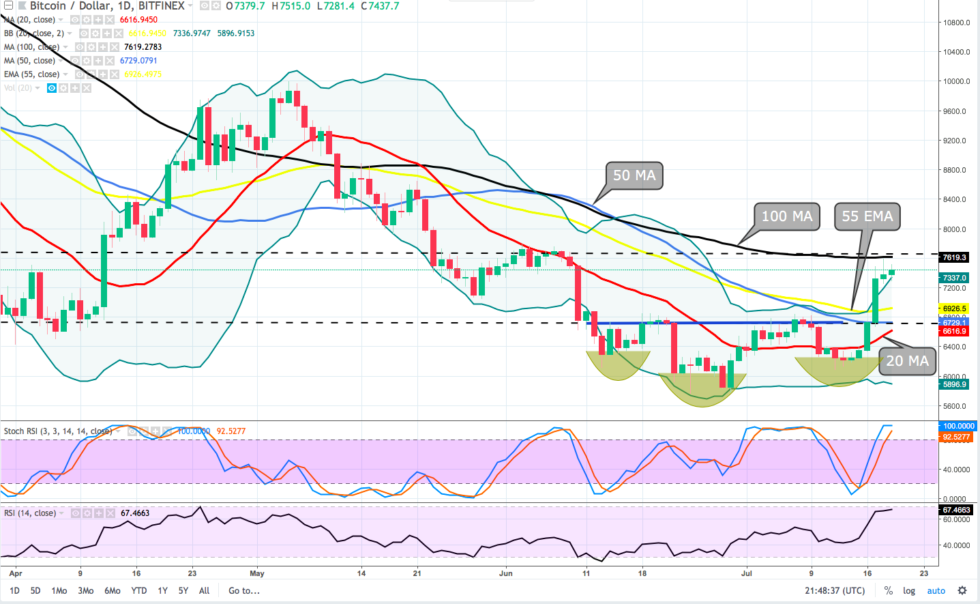 Yesterday BTC 00 blasted above the 20 and 50-day MA and currently hovers right below the 100-day MA as it appears set to have a go at the $7,600 resistance followed by $8,000. After yesterday’s 10% gain BTC nearly crossed $7,600 before taking a short water break as volume gradually tapered off and BTC briefly retracted a bit under $7,300.

As mentioned in previous analysis, Bitcoin required a sustained high volume breakout in order breach stiff overhead resistance levels and the recent completion of the inverse head and shoulders formation along with the hint of bullish expansion in the Bollinger bands hinted that BTC was at last prepared for a breakout to $7k and above. Furthermore, a glance at the daily and 4-hour charts shows that BTC finally managed to poke above the 55 EMA which typically is a sign that hints at a reversal.

For the first time in months, volume remained steady as Bitcoin crossed through numerous resistance levels and notched a 40 day high at $7,588 yesterday

Though the rally has taken a pause, Bitcoin remains poised in a bullish stature as the 50-day MA has flattened and the 20-day MA looks set to cross the 50 in the near term. The former resistance at the head and shoulders neckline is likely to function as a support now and at the time of writing the Stoch begins to plateau in the overbought zone while the RSI continues to climb into bearish territory. 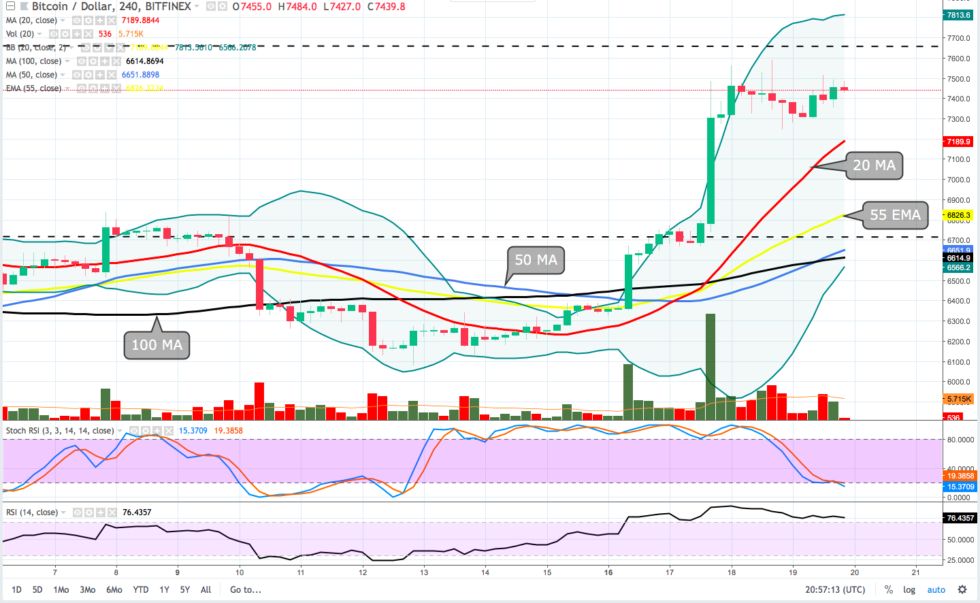 The 4 hour chart shows Bitcoin 00 constricting from 13th – 16th July before breaking out and it is relatively easy to see BTC being biased toward bulls in the short term as the 20-day MA has blasted over the other moving averages and the upper arm of the Bollinger band indicator continues to expand and accommodate BTC price.

Meanwhile, the Stoch is reflective of the pullback from $7,588 to $7,244 as it now bounces off oversold territory and the RSI has flattened in bullish territory.

BTC remains bullish for the short term as the path of least resistance should follow the upward trend based on the position of the moving averages. As mentioned earlier, $7k and the neckline of the inverse head and shoulders formation should serve as a support in the event of a pullback.

From a technical standpoint, BTC appears ready to make a run at $8,000, possibly over the next 2 to 3 days.

This current rally was supported by high volume and traders should continue to keep an eye on volume, along with the 5 and 10-day MA on the 1-hour chart.

The post Bitcoin Price Analysis: Is this a Bullish Reversal or the Puppet Master at Play? appeared first on Bitcoinist.com.

A Japanese Telecom Giant Wants to Use Blockchain to Store Contracts