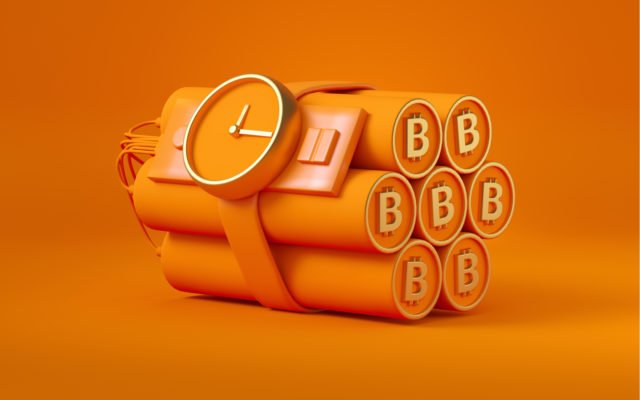 September marked Bitcoin’s tightest relative trading range since 2016 — opening the month of September at $7,015 and closing the month, the week, and the quarter at $6,598.  While this represented a win for the Bears, the inability to make significantly lower lows beyond critical $6,000 support could be a sign of underlying strength in this market.

The Monthly chart shows a pinch in the price action which will need to be resolved in the coming weeks.

Consolidation Coming to An End

Bitcoin has a long history of price action consolidating in the form of triangles or wedges, which typically last around a quarter. These 3-4 month consolidations end with a significantly fast and volatile move — typically leaning in the general direction price is traveling. Although Bitcoin is generally in a bear market, the megastructure is clearly exponential, so it is not completely clear how this will resolve.

Market participants have taken price action right to the apex of this triangle. There is a general consensus among traders that this will be resolved in the next couple of weeks.  Now is the time that traders will be paying particular attention to price action to position themselves for anonymous Bitcoin buying or selling opportunities when price direction becomes clearer.

Q4 has a history of being a volatile few months for Bitcoin, as noted by well-known trader-educator Josh Olszewicz in a chart which illustrates that some of Bitcoin’s most defining moves take place in the final quarter of the year.

Q4 has seen explosive moves to the upside historically#WakeMeUpWhenSeptemberEnds pic.twitter.com/OhTQgWJOEr

Looking more closely at the daily chart, we can we can see that the triangle price range which Bitcoin is currently consolidating within is either within a long drawn out falling wedge (in the opinion of the writer) or that of a descending triangle.

Prices above $7,500 would represent the first higher high of 2018, a breakout of the linear downtrend, and be a sign that Bulls were back in command. A lower low below $6100 would, in fact, be a lower low — and mean a more lengthy Bear market.

Traders and investors will be looking at their go-to indicators to try and ascertain what direction the market may be about to turn ahead of fundamental movements in price.

The MACD or Moving Average Convergence Divergence Histogram shows the relationship between two moving averages of a price.  It is reading as almost entirely flat on the daily chart, showing that Bitcoin is poised for a move — but does not currently serve to assist with a directional bias. Traders will be watching for a clear directional confirmation by seeing higher highs or lower lows on the Histogram.

The indicator Chaikin Money Flow (CMF) shows buying and selling pressure by combining price and volume into one metric where values trending higher above zero are considered to be bullish.  While Bitcoin has not been able to achieve a CMF value greater than 0.25 since the bull market, Bitcoin is trending above zero and reaching out to the 0.25 level now.  A break below zero would be indicative of lower prices.

The Relative Strength Index(RSI) is a momentum oscillator that measures the speed and change of price movement.  The RSI is also locked into a consolidation at around a value of 50, with no particular directional bias — so any break would be an early indication of the market sentiment.

Although there is not a secret formula to reveal the next price move, these indicators have clear levels to watch and will help traders with confirmation over the coming weeks.

So, in summary, its clear that there is a big move coming for the final quarter of 2018 — which is likely to happen sooner rather than later.

Despite positive signs in the charts and indicators, it is important to remember that Bitcoin remains locked in a bear market.  Some of the more bearish traders in the marketplace who survived the bear market of 2018 like the $6k trading range to that of the $300-$400 range which preceded the final dump off to sub $200 in 2015.

However, should Bitcoin fail to make new lows, there will be an influx of buying pressure from those awaiting confirmation before investing — those who aspired, but failed, to buy cheaper Bitcoin and from those looking to close long-term short positions in profit.

No one knows the direction for sure, but time in the $6,000 price range is coming to an end.

Will it be a bullish or bearish Q4 end of 2018? What price levels are you watching? Share your predictions below!

Bitcoin Will Not Challenge Gold as a Safe-Haven Asset: Equity Analyst