The value of Bitcoin was noting a surge of 62% in YTD, with the world’s largest digital asset being traded at $11,767, at the time of writing. With the cryptocurrency climbing on the charts, it has grabbed the attention of investors and traders across the board, many of whom are expecting a major bull run soon.

With Bitcoin’s spot volume gaining momentum, global peer-to-peer trading volumes have also surged to levels last seen in January 2018, with approximately $95 million exchanged between LocalBitcoins and Paxful by the beginning of August alone.

The attached chart highlighted the rise in the P2P volumes since May, with the same observing that volumes hit their peak towards the beginning of August. This spike was a result of heightened trade activity in the P2P markets of Latin America after Bitcoin underwent its third halving. The steady consolidation of the digital asset under the $9.5k range also allowed many Bitcoin enthusiasts to hodl the cryptocurrency, in case the market surged.

Interestingly, LocalBitcoins was once the dominant P2P platform in the region, until it levied a KYC compliance rule in September 2019. Paxful has since overtaken LocalBitcoins in terms of volume. 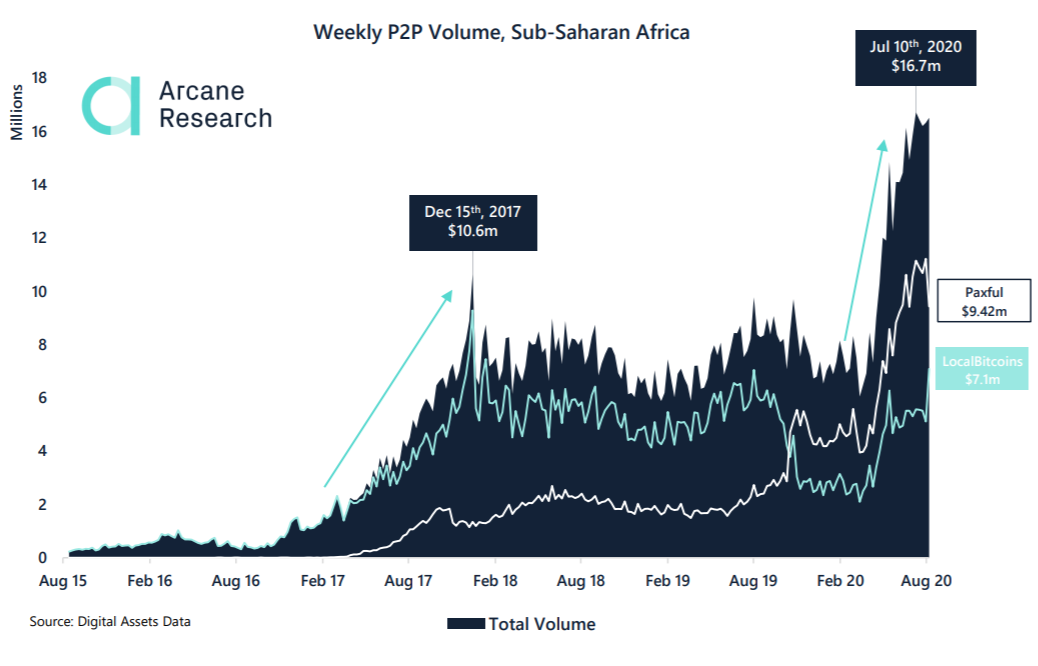 According to many, Africa might yet emerge to be the next frontier for crypto-assets, however, many still lack access to banking services. As per reports, only 40% of Sub-Saharan Africa’s population has access to banking services, loans, savings, etc. Interestingly, this hasn’t stopped the cryptocurrency market from growing, especially in Nigeria, with the country accounting for around 60% of the weekly volume on the charts. Further, other countries like Kenya and Ghana have also noted significant growth in weekly volumes this year, over 3x their size in early-January.

On the contrary, P2P volumes were falling in other regions across the world, when compared to the previous week’s performances. Despite the fall in volume, however, North America continued to lead the P2P market with a volume of $25.520 million.