Volatility and fear have been making up the crypto market at the moment. While Bitcoin [BTC] looks at another crash owing to the stock market, the remaining market has also been suffering. This present state of the market has put the best performers in the market, small-cap assets, in the worst-performing category, while BTC leads with a relatively low loss. 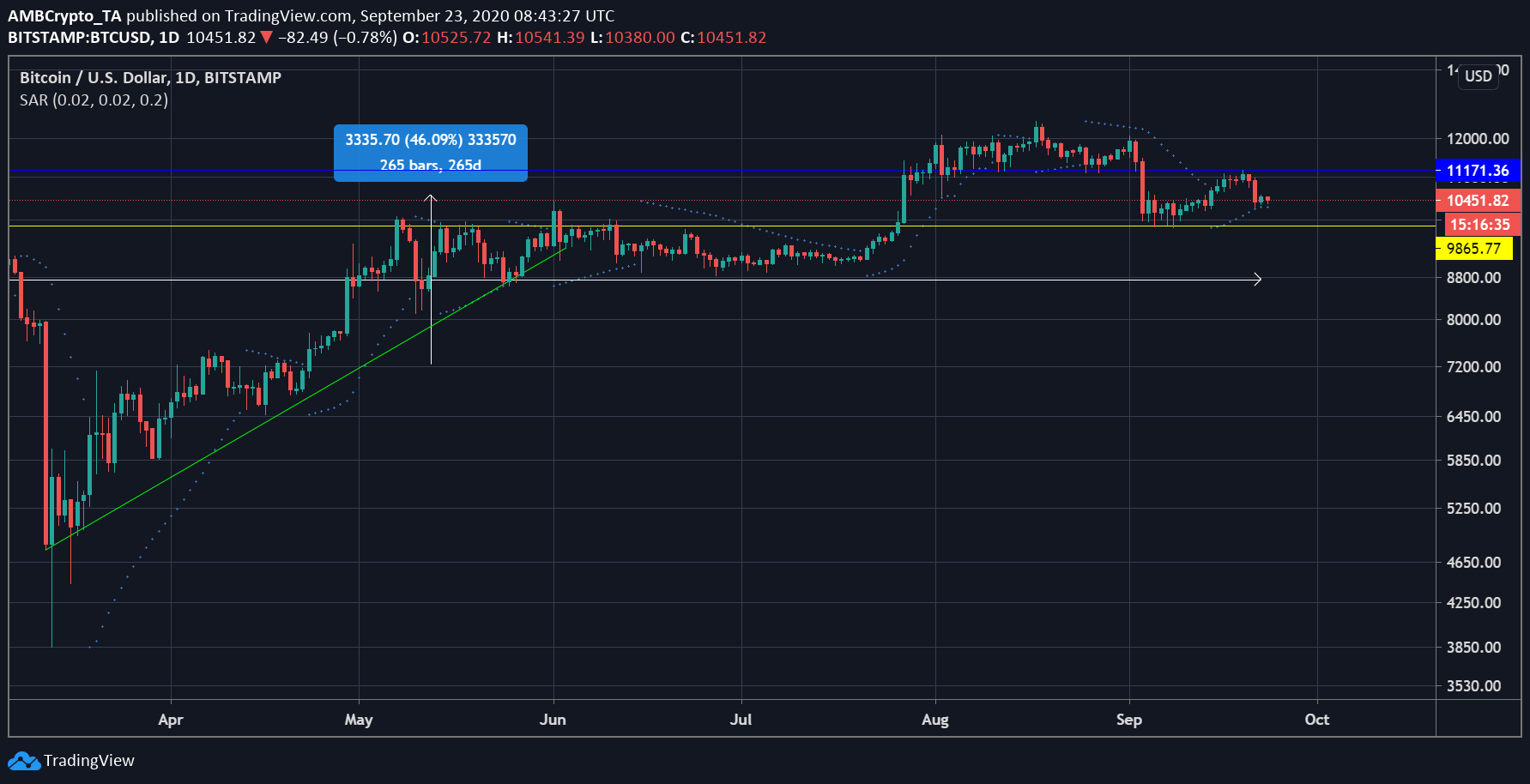 The daily chart noted that the investors in BTC were still reaping a 46% profit, despite the roller-coaster-like movement of the largest digital asset. Even though the coin has suffered a large blow at the start of the week, the traders have continued to accumulate the digital gold.

This accumulation was visible as, despite the loss, BTC’s price bounced from the lows of $9,825 on 8 September to $10,454, at press time. The upwards push changed the bearish trend to a bullish one. The parabolic SAR indicator highlighted this bullish behavior of the BTC market with its markers aligning under the candlesticks, confirming the upwards movement of price. However, fear of another blow still lingers in the market as another set of BTC contracts were to expire this Friday.

Fairly new in the market, the Crypto.com coin has been inflating in value since its launch. Even though its price was hit by the sell-off wave recently, it maintained its high YTD returns of 336%. The current value of the token was $0.1502, but the price has been consolidating between $0.1783 and $0.1423 since late July. The crash on Monday pushed the asset’s value below the support at $0.1423 but was quick to jump back between the immediate support and resistance.

Even though the BTC market was suggesting a level of bullishness, the CRO market was still bearish. The MACD indicator signaled at a growing negative momentum in the market, which was an indication of increased sell-off in the CRO market, at the time of writing. As the red bars extended further in the negative territory it meant the selling momentum was on the rise. A few days back there were issues pointed out by the users with the Crypto.com app and was under maintenance. The CEO, Kris Marszalek assured that the funds were safe and trading on the platform resumed in no time.

Maker breached under its support at $500 and was currently valued at $457.22. The current price movement has formed support at $437.59, whereas the resistance was marked at $506. However, the Maker market has taken a bearish turn since the beginning of September.

This was indicated when the Bollinger Bands opened wide for volatility and the signal line was over the candlesticks indicating a downwards trending price. The signal line has remained above the price bars and suggested the asset may trend lower for a while at least.