Bitcoin Price Drops Back To $7,900 as Bulls Lose Steam 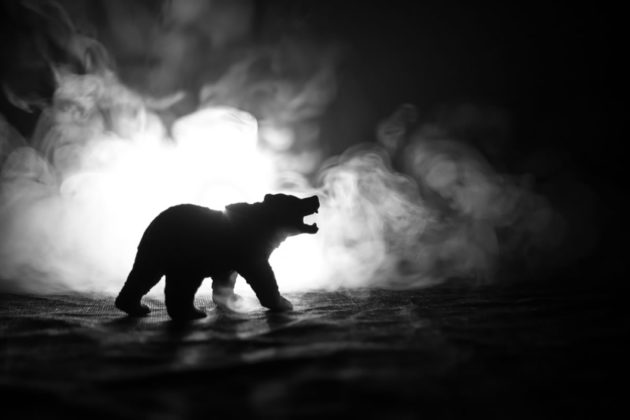 What started out as a positive week for bitcoin has turned bearish again as the world’s top digital asset plunged below $8,000 yet again. A few hours ago BTC wiped out its weekly gains and the big move that many have predicted may just have initiated.

Bitcoin Price Back Below $8k

The purge initiated a few hours ago and accelerated during today’s Asian trading session with a dump to $7,920 according to Tradingview charts. It has made this move five times already this month and clearly cannot break resistance at $8,300. 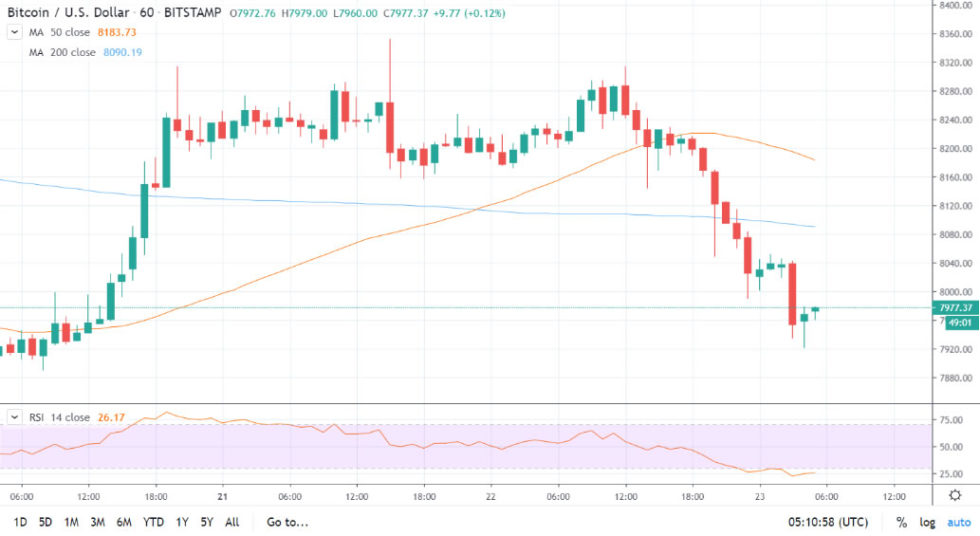 The good news is BTC is still within its range-bound channel and has yet to fall through monthly support at $7,800. However, the big question is; will it continue to slide or regain composure above $8k again?

A drop below $7,750 is likely to induce a larger dump down to a new price floor. Previous price areas in the first shoulder of this large chart pattern were at $7,450 and $7,000 so those are likely to be the next targets for any major downwards movement.

Trader and analyst, Josh Rager, has been adding up the technical indicators and they are all bearish. Yesterday he commented on the Bollinger Band squeeze that has previously led to further downsides, while today he looked at historical volatility.

As you can see with not only Bollinger bands but also historical volatility (HV) that a major move is brewing. With a slow sideways market, we’ll see descending HV that indicates a strong reaction in price action ahead and rise in volatility

With a slow sideways market, we’ll see descending HV that indicates a strong reaction in price action ahead and rise in volatility pic.twitter.com/kee1IkjKBB

Both signals are bearish at the moment as the downtrend does not look like it is ready for a reversal. This has been backed up by the imminent death cross on the daily time frame which is likely to form today or tomorrow following BTC’s recent plunge.

No Love For Altcoins

The move has knocked $7 billion off total crypto market capitalization in less than 24 hours. Bitcoin dominance has held above 68.5% which means the altcoins have been hit even harder yet again.

Ethereum has shed over 4% on the day to dump to $164 before a slight pullback according to Tradingview. The world’s second-largest crypto asset is currently trading around $168 but it’s market cap has slid to $18 billion.

The entire crypto market is awash with red at the moment with the BCH, BSV, Dogecoin, Chainlink, and Tezos getting the biggest hits. The only BAT appears to be bucking the trend with a 7% gain as total market cap plunges to $217 billion.

At the time of writing, BTC is still clinging to support but it and the rest of the crypto market is teetering on the edge of the abyss.

Will bitcoin price dump to $7k this week? Add your comments below.

The post Bitcoin Price Drops Back To $7,900 as Bulls Lose Steam appeared first on Bitcoinist.com.

Are Bitcoin Day Traders Playing The Pump And Dump Game?

Polkadot to Use Chainlink Oracles for Interoperability Network