What do Bitcoin and marijuana industry have in common, and what conclusions can we draw from this?

Tilray INC, a pharmaceutical company and a cannabis producer, grew to $200 in September 2018. According to the Forbes report, the premium cannabis products supplier has gained an advantage over, among others, American Airlines.

Unfortunately, as in the case of Bitcoin, growth in the cannabis industry does not last forever. Direct investments in cannabis are relatively low. Only a few companies in the United States actually trade cannabis. Another serious problem for Tilray is the legalization of cannabis in Canada, which attracts many investors to that market. We’re talking about a full-out legalization of recreational use of cannabis. Ontario, Canada’s most densely populated province, will sell cannabis in private stores from April 1. Until then, cannabis will only be legally available only via mail order sales handled by the government and private online cannabis shops.

These reasons led to speculation that changes in the price of shares of Tilray and other companies from the cannabis market may be similar to movements in Bitcoin prices. The Bitcoin to USD exchange rate rose to $20,000 in December 2017. Then it fell by 60% in a few weeks, which affected many investors. As can be seen in the chart below, crypto buyers are not the only market characterized by high volatility. 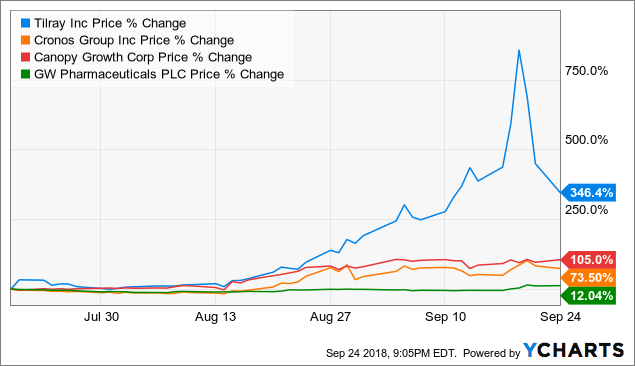 What do Bitcoin and marijuana stock have in common?

According to a Forbes report, the actions of Bitcoin and cannabis companies have several common factors. One of the main difference between them is that Bitcoin was neither a regulated means of exchange, nor was it widely accepted by the public. This reason could have caused the price of Bitcoin to fall.

On the other hand, cannabis had a strong and well-established market. Around 9.5% of adults reportedly used cannabis in 2015, which is almost twice as high as ten years ago. In addition, analyses indicate that use may increase in the near future because of changing regulatory policy and public perception of cannabis use.

Tilray’s price volatility should not be seen as a loss of investor confidence in the cannabis industry. This is more a reflection of the unique dynamics of the company and the industry as a whole. Both Bitcoin and the legal cannabis industry are very unstable and new to the market. They have enormous growth potential, but we can never take this for granted. In the Forbes report you can read that returns can be high, as well as risks, making the cannabis industry a possibly good investment.

Waiting game: Why Friday’s $6B in Bitcoin and Ethereum expiries may not move the…