Many of the market’s cryptocurrencies, at the time of writing, were going through an upheaval of sorts on the charts. Binance Coin was in a general uptrend, before noting a retracement. On the other hand, TRON and IOTA gave significant signals regarding the direction of their future price movements.

With Bitcoin attempting to breach $12,000, the good fortune of some altcoins may see a reversal, especially if BTC notes strong rejection around the 12k-mark. 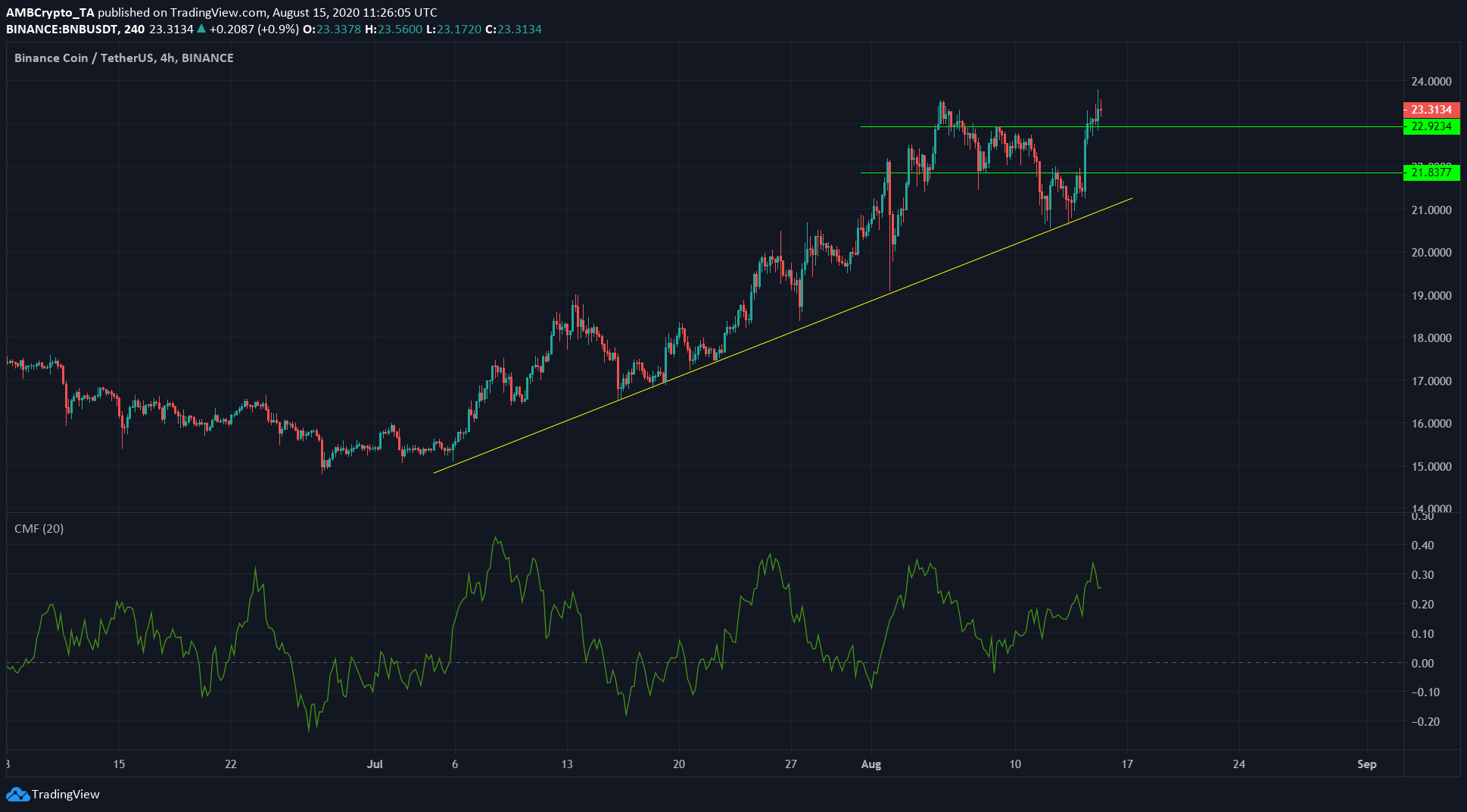 Binance’s native token, Binance Coin, has performed strongly since dipping to $15 in July. In fact, it was ranked 10th on the cryptocurrency ladder, with BNB having a market cap of $3.37 billion.

While BNB registered an uptrend soon after, this was followed by a pullback to $20.85. Owing to this movement, BNB’s major short-term resistances were marked the $22 and $23 regions. However, at the time of writing, both these levels had been breached.

The Chaikin Money Flow showed money flowing into the market, reinforcing the idea that buyers are driving prices up with good volume. The next resistance over the longer timeframe lay near the $24.2 region. However, the pattern it displayed traditionally leads to a downside, with the $20-zone being the support level for BNB. 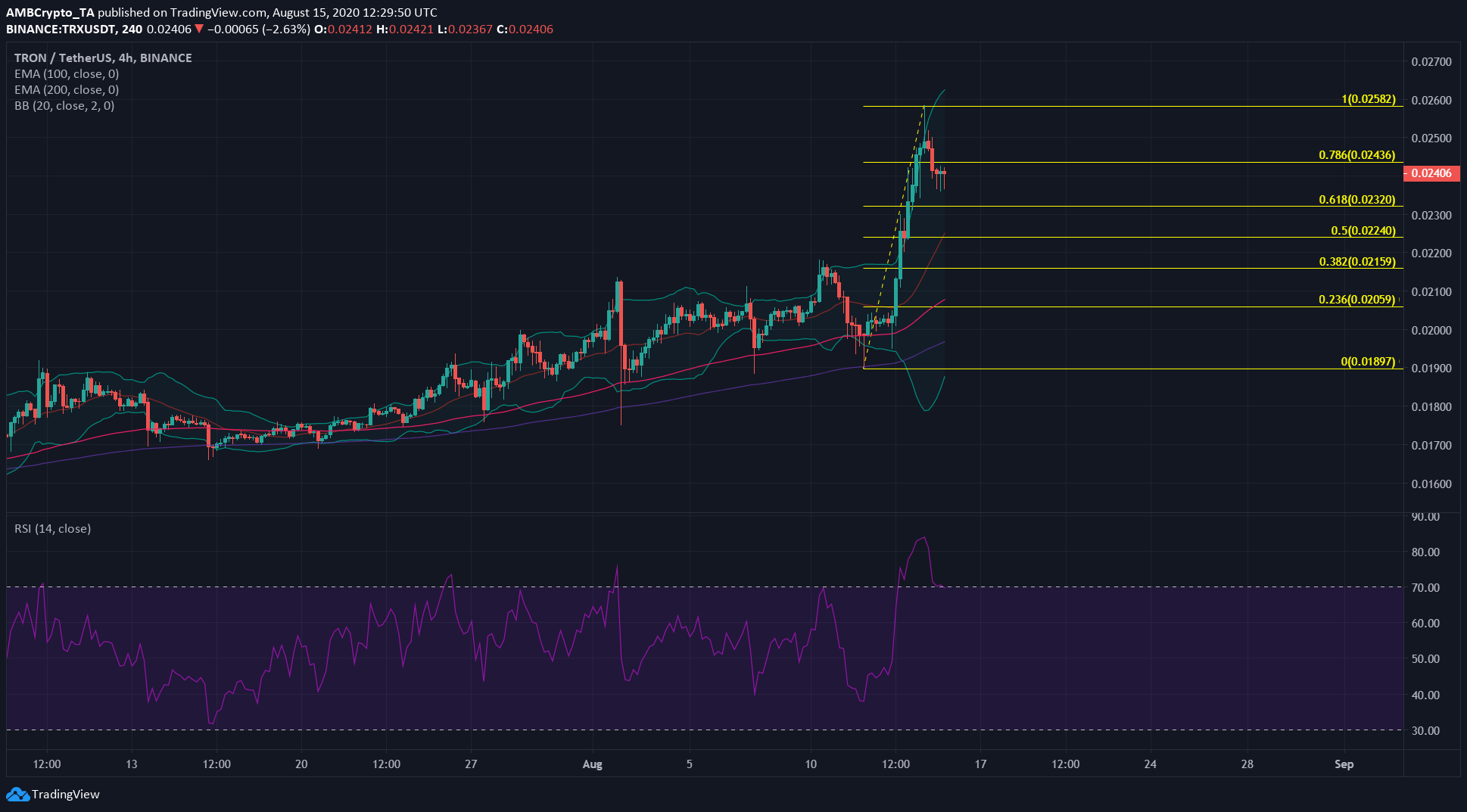 TRX‘s latest uptrend began at $0.17, with the crypto’s price, at the time of writing, registered to be around $0.024. TRX showed good upward movement over the past few weeks, but it also showed sharp retracements on the charts. This was highlighted by the width of the Bollinger Bands, with the same underlining the price volatility in the market.

The Fibonacci retracement levels for the most recent surge are shown on the attached chart. The 0.618 level ($0.0232) and 0.5 level ($0.0224) can be tested before TRX moves further north on the charts. Further, an RSI value of 70 indicated that the crypto-asset was trading in the oversold region, reinforcing the possibility of a brief retracement.

TRON recently announced its partnership with WAVES to use Gravity to connect their respective blockchain languages – Solidity and Ride, respectively. TRON had a market cap of $1.7 billion and was ranked 15th on CoinMarketCap. 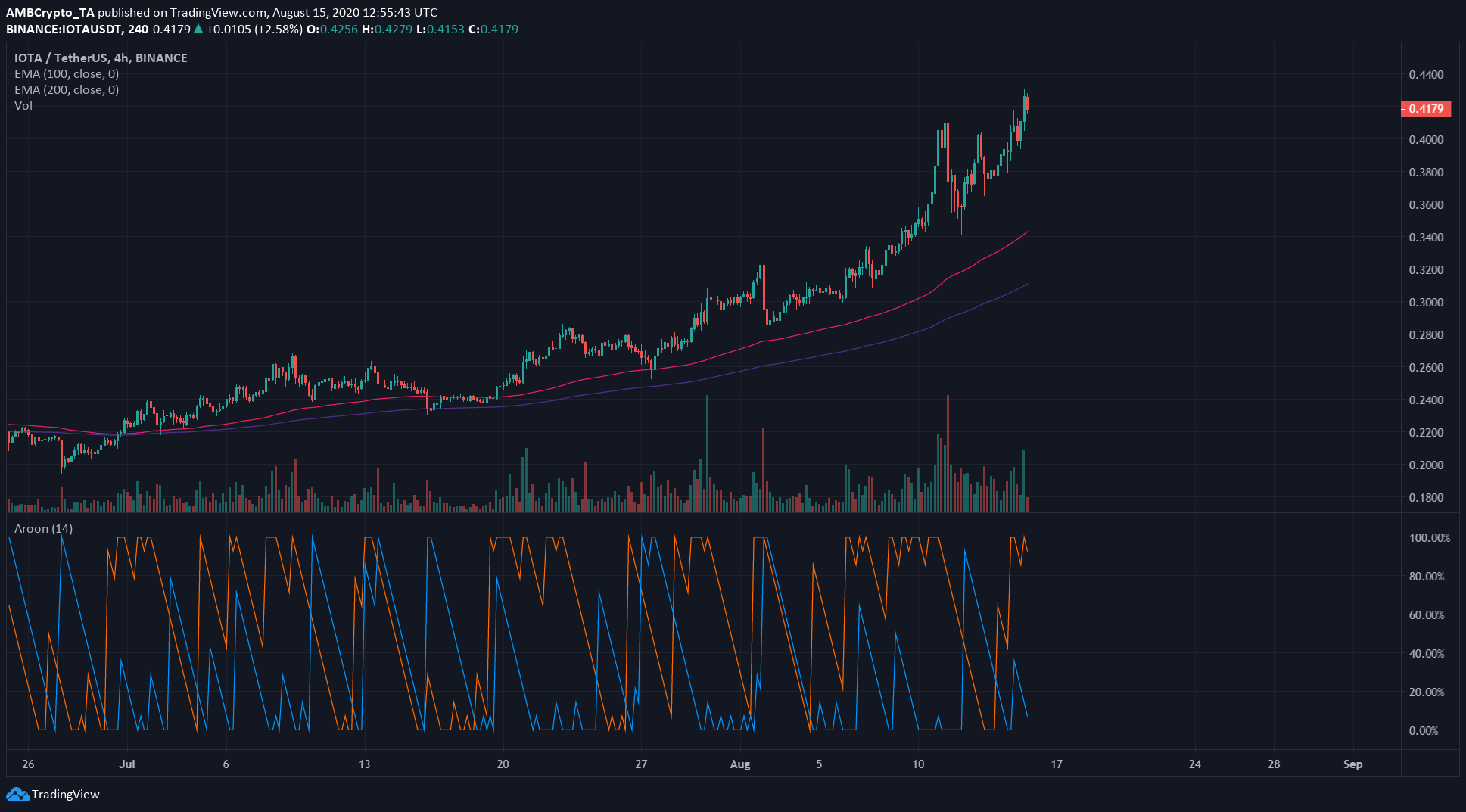 IOTA was ranked 20th with a market cap of $1.16 billion. The month of August saw IOTA rallying strongly, with almost 50% gains already registered on the charts.

The news of the implementation of Chrysalis could have contributed to price surge as well. Scheduled for next week, this upgrade of the mainnet was positively received by the many in the community and the market.

On technical grounds, the cryptocurrency made the higher lows that characterize an uptrend. The Aroon indicator agreed, highlighting that the whole of August was a series of higher highs for IOTA. The strength of the trend suggested that any dips would soon recover.

The next major resistance for the coin on a larger timeframe was seen around the $0.5 region, with another resistance at $0.6.

The price was a healthy distance above the 100 EMA (pink), which again was socially distanced from the 200 EMA (purple). This pointed to a strong rally, with further upside possible.