With Bitcoin once again inching closer and closer to $12,000, some are hopeful of the rise while others are fearful of a fall. Depending on which side of this equation you’re on, you’re either a hodler or a seller. Each side has an equal tug on the market as while hodlers are hodling on expecting the price to increase, traders are selling fast and expecting the price to turn for the worst.

Over the past few weeks, there have been lots of outflows and inflows from these two sides, given the ups and downs of the market. In the past three weeks, Bitcoin broke $10,000, then $11,000, and briefly pushed over $12,000, twice, before dropping down. Following this surge and sideways movement, both hodlers and traders were worried about their own BTC-bags and some of them cashed out.

It should be clarified that the author of the report, Chainalysis’s Chief Economist Philip Gradwell, clarified and told AMBCrypto that “sent” here does not entirely refer to liquidations. He said,

“Sent means the cryptocurrency was moved from any entity to another entity. So these are not necessarily being sent to exchanges.”

Gradwell added, upon confirming the destination of the crypto-movements, that 80 percent of these Bitcoins were likely “sent to an exchange.” He went on to say that being “sent” to exchanges does not mean the Bitcoin were liquidated for fiat currency, it could’ve been traded for altcoins or a stablecoin, His analysis does not observe which cryptocurrencies or fiat currencies these BTCs were converted to or if these have been executed as yet, but he did make an “educated guess on the same.” 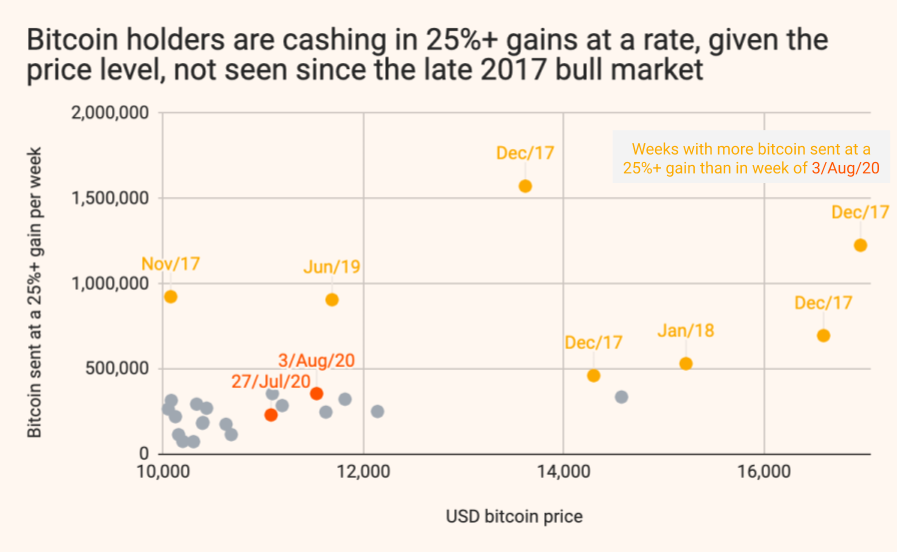 Among the remaining 14 weeks, 11 were between June and September 2019, a period during which the Libra and CBDC craze pushed Bitcoin higher until the launch of Bakkt and the underwhelming pressure that followed pushed the price back down. The last three all came in 2020, one in February (which was short-lived), and the final two over the past two weeks, beginning on 27 July.

What this means is that Bitcoin is not one to hold above $10,000 for over a week, and when it does, it’s significant. The fact that Bitcoin is holding, despite the massive sell-offs over the past two weeks, is, according to the report,

“People are currently taking profits at a high rate and the price is being maintained.”

To put this in simple terms, there is a supply of Bitcoin with sellers looking to realize their profits, but at the same time, there is a demand for Bitcoin, with buyers looking to buy expecting higher profits. Which way the supply-and-demand curve swings will determine the price going forward.

The post Another 356K Bitcoin sold for profit – Is $12,000 a pipe dream? appeared first on AMBCrypto.